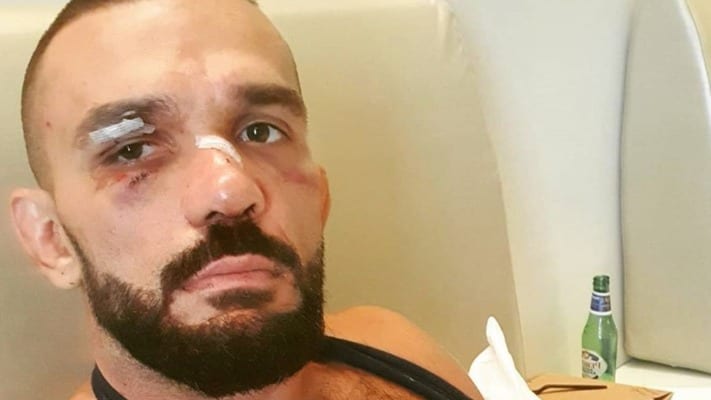 Peter Sobotta has called time on his career.

Sobotta was outclassed on the feet and also broke his right arm early on in the fight which likely stemmed from blocking Oliveira’s body kicks.

Given how the fight went, the 33-year-old decided it was time to walk away. Here is what he had to say (via Google Translate):

“Unfortunately, it wasn’t enough to win tonight. I’m also not particularly well. I broke my right arm early in the fight, my face had to be sewn in four places. I’m not looking for excuses. I was the worse fighter tonight. Not ready to grit your teeth and go forward. Too little pressure, too little courage, too few hits. I could not play my greatest strength because several takedown attempts failed. Oliveira deservedly won.

“I have to recognize that my path as an active MMA fighter ends after 17 years. I felt that in the ring today. I really love this sport with all my heart and this decision hurts more than any broken bones and ligaments. But I just don’t have the toughness, robustness and willingness to take risks to fight at the top. It was a damn wild ride and I am infinitely grateful for the emotions and experiences that I was able to experience. Thanks to EVERYONE who accompanied and supported me 🙏🏻🙏🏻🙏🏻”

His last win came in May 2017 when he finished Ben Saunders via TKO. He would go on to lose to Leon Edwards in 2018 before suffering his most recent setback against Oliveira.

What do you make of Sobotta retiring?