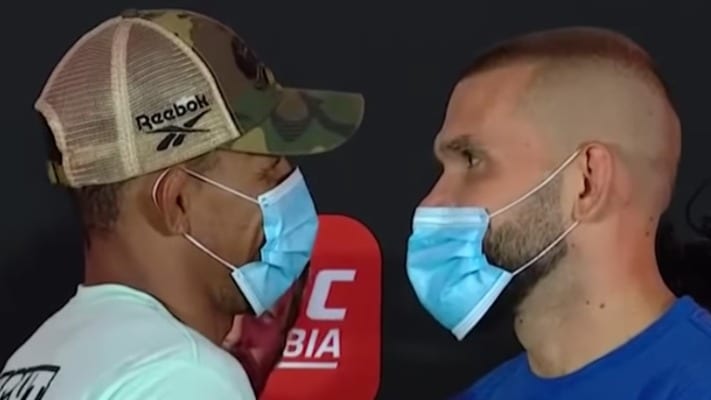 Next up on the UFC Fight Island 3 main card is a welterweight tilt between Alex Oliveira and Peter Sobotta.

Round 1: Oliveira starts things off with a body kick. Sobotta slips away from an overhand right. Oliveira seems to have hurt Sobotta with a body strike. He recovers and lands a body kick on Oliveira. Oliveira continues to use his kicks as he switches from body to head. Sobotta’s arm seems to be compromised from blocking these kicks. Regardless, clear round for Oliveira.

Round 2: Oliveira attempts a jumping switch head kick but it’s blocked by Sobotta. Sobotta decides not to continue striking and looks for the takedown. Oliveira defends and turns him around before they return to striking. Oliveira slips a punch and lands a nice counter. The action temporarily stops as Oliveira strikes Sobotta on the groin. Sobotta starts to be more active and lands some leg kicks but it’s clear who the superior striker is here. The action is stopped again as Oliveira pokes Sobotta to the eye. The fight resumes with just over 40 seconds remaining. Sobottoa resumes with a leg kick while Oliveira is loose and dancing away as they exchange leg kicks. Oliveira drops Sobotta with a straight right as the former attempts a leg kick but the round comes to an end.

Round 3: The pair return to striking. The fight is momentarily on the ground but Oliveira wants to keep it on the feet. Oliveira hurts Sobotta with another body kick. Not a lot of action since with lots of feinting and blocked strikes. However, Oliveira leads 41-17 with total strikes and should be on his way to winning. He lands another big body kick and follows it up with a leg kick. Sobotta looks to counter with a kick of his own but it’s blocked. The fight ends and it should be a win for Oliveira.