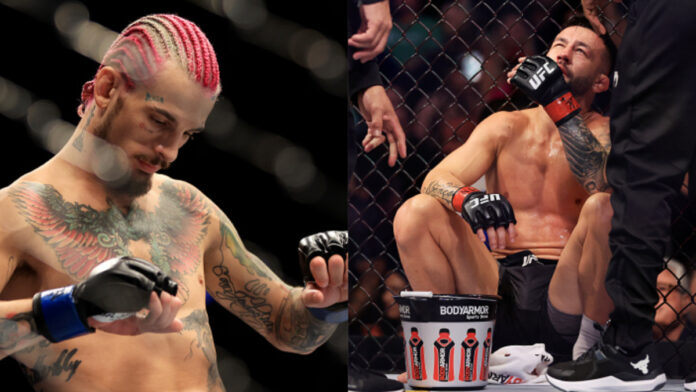 Pedro Munhoz has released his official statement on the Sean O’Malley eye poke at UFC 276 that caused a no contest. The conclusion was no doubt bitter for Munhoz, but what surely made it worse was the number of fighters and fans alike who claimed Munhoz might have been exaggerating the severity of the eye poke to get out of the fight.

The battle was short, as it ended only a few minutes into the second round. Most would say it was a bit lackluster, as Pedro Munhoz was opting for more of a leg-kick-centered strategy that frustrated fans.

Regardless, nobody would be graced with a true conclusion to the fight due to the eye pokes. Things would end with a no contest, and ‘The Young Punisher’ would be faced with criticism for not wanting to fight with a single eye.

“To explain briefly what happened in the fight against Sean O’Malley, I was poked in the eye in the first round but kept fighting, and was hit with a low blow shortly after,” Pedro Munhoz said on Instagram, as translated from Portuguese by Guilherme Cruz of MMA Fighting.

“The fight restarted and we exchanged a few strikes. In the second round, that’s when I suffered another eye poke. I couldn’t see anything for 20 minutes. I was taken to the hospital and they used a special eyedrop that made my eye numb so they could open my eye.”

“They did an exam and the medical report I have is that there’s a scratch in the cornea all the way around it,” Pedro Munhoz continued. “I couldn’t open my eye because of that and couldn’t see anything. The referee asked if I could see at all and the doctor decided to stop the fight. That’s what happened tonight.”

This no contest makes ‘The Young Punisher’ 1-3-1NC in his last five fights. A once-dominant bantamweight who reached decisions against some of the toughest in the weight class, Munhoz has been experiencing a rocky road as of late.

What’s next for Pedro Munhoz after this controversial no-contest?