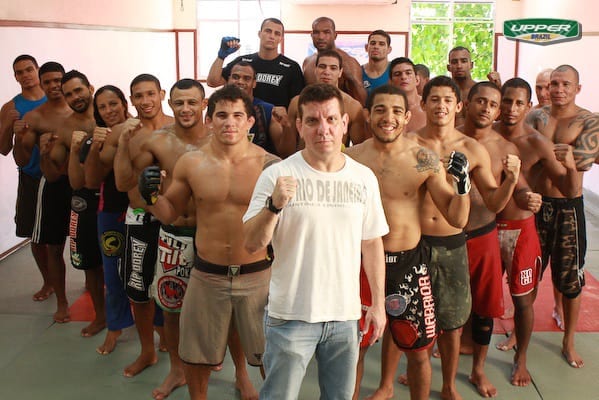 There’s an unlikely beef building at the moment between the world famous Nova Uniao gym in Brazil and UFC heavyweight-come podcast host Brendan Schaub. ‘Big Brown’ recently went on record as saying ‘Brazilian fighters aren’t doing as well under the stricter drug testing,’ which is a flat out accusation without having to read between the lines. It seems that Renan Barao’s second loss to TJ Dillashaw was perhaps the biggest motivation for these comments.

Then there’s also the UFC 189 drug testing bungle featuring Aldo and Pederneiras. When the NSAC (Nevada State Athletic Commission) attempted to collect a random urine sample from the featherweight champ, an apparent mix up led to a controversial wave of negative media attention. The full story did seem to alleviate any wrongdoing by Aldo’s camp, but the impact of that period of time has led to a rift building gradually between the promotion and their only ever featherweight kingpin.

Schaub picked McGregor to beat featherweight champion Jose Aldo, and the Brazilian boss’ coach Andre Pederneiras has fired back on Combate, via MMAFighting, writing an open letter to the UFC heavyweight. Check it out:

I found Brendan Schaub’s accusations to be very serious. Before talking a bunch of crap, I think Mr. Schaub should get informed about the facts. When the new doping policy was announced to me by UFC matchmaker Sean Shelby, I asked him if the UFC could do it for Aldo’s fight (at UFC 189), with daily tests on Aldo and McGregor. I made this same request to Mr. Jeff Novitzky, responsible for UFC’s antidoping, that fighters were tested at least three times a week. And when I met Dana White the last time, I made this same request. So I ask the UFC, Dana and Lorenzo Fertitta again: test Aldo and McGregor at least three times a week, for three months before the fight, and I will pay for the costs, as I promised them every time I asked them to do this.

Accusing my fighters of doing steroids is, at least, jealousy for their results — results we never saw and will never see in your career, Mr. Schaub. Don’t try to throw dirt in clean person’s careers, people that worked hard throughout their entire lives. We have no fault for your failure as a fighter and athlete. I ask you to get back to your insignificance in this sport. Clean your mouth before mentioning a Brazilian or an athlete from my team, because the name of my country and my fighters can’t be said by mediocre people like you.

I find offensive to talk about the Brazilian and South American people since doping is there for anyone, not only for Brazilians. Your quotes make it look like no athlete from another country was ever caught, only Brazilians. And if some Brazilians were caught, they didn’t learn how to do it here, that’s for sure.

Accusing others several fighters with no base may sound prejudice for some. To be, it’s just jealousy of Brazilians. If we think about it, it’s really unbelievable what Brazilians can do: we have no training since kids, we don’t have adequate food in the infant stage which, as we all know, it’s the most important, we don’t have adequate supplements because we can’t buy it since it’s too expensive when it gets in Brazil, and much less investors who believe in the sport, and we still go to the biggest MMA promotion in the world and fight with athletes from any other country, and we win most part of the time. We’re still considered a third world country, and instead of talking trash, you have to respect us, because if you make money today in this sport, you have to thank my country and Brazilian athletes who created this sport.

After this frivolous and baseless accusation, I again ask the UFC, Dana White, and Lorenzo Fertitta to drug test Aldo and McGregor for three months, at least three times a week, blood and urine. I will pay all the extra costs that it might bring. After all of this, I don’t see how it won’t happen for this fight.

My name is Andre Pederneiras, I’m proudly Brazilian, and the only thing I ask every MMA athlete is to respect my country because if this sport exists today, it’s because Brazilians created it.

The epic nature of this comeback is not lost in translation. Brendan Schaub, the ball is in your court…..