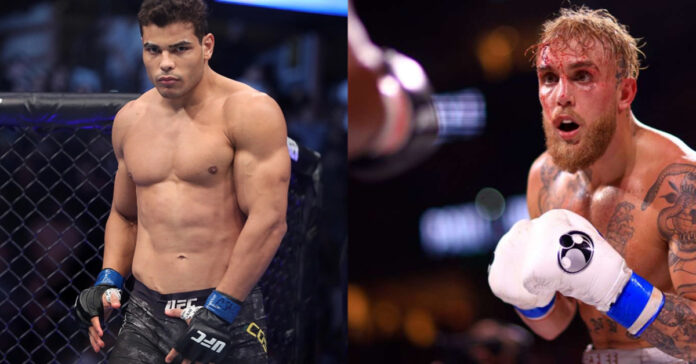 Paulo Costa didn’t take too kindly to Jake Paul’s criticism of his fight with Luke Rockhold at UFC 278.

The match had some of the most memorable moments of the entire card, and if it wasn’t for Leon Edwards sleeping Kamaru Usman with less then a minute left, it would have gone down as the most memorable fight of the evening. From the endless back and forth striking, to Rockhold smearing his bloody nose all over Costa’s face, the fight was extremely entertaining. Costa even showcased his underrated grappling ability, by out wrestling Rockhold.

With all that said, Paul hated the match and even went on to call it a “glorified street fight”.

This comment led to a back and forth between MMA journalist Ariel Helwani and Paul, debating whether or not Rockhold was a true legend in the sport. Paul an obvious “casual”, had no idea what Rockhold had done in the past, and truly how well rounded of a fighter the former champion was.

If this is the last one, Jake Paul is very welcome to send an offer or a contract and we can do this boxing fight,” Costa told reporters at the post fight press conference (Transcribed by MMA Junkie). “I don’t know if he wants this blood, you know? I think he wants to fight wrestlers or something like that, I think.”

Costa also took to Twitter to call out Paul for not boxing against fighter known for their boxing ability inside the cage. Costa had asked why Paul hasn’t called out someone like Mike Perry, who is undefeated in his BKFC matches thus far.