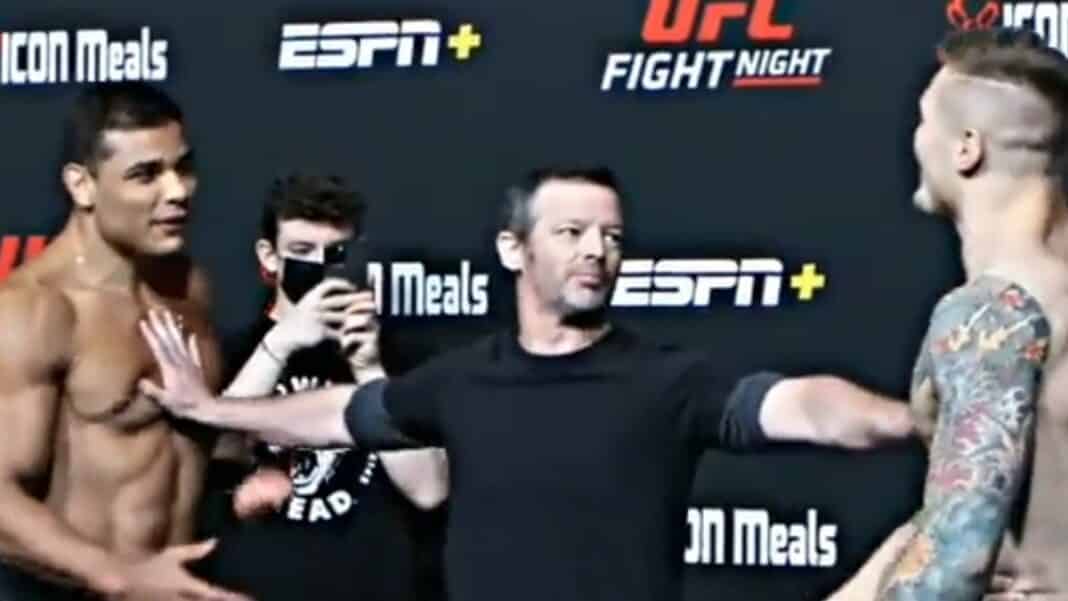 After one of the most unusual fight weeks in recent memory, Paulo Costa and Marvin Vettori successfully weighed in at a catchweight of 205 pounds ahead of their main event, and nearly got the fight started early during their heated faceoff.

Originally set to be a matchup of top middleweight contenders, the UFC Vegas 41 main event between Costa and Vettori underwent multiple changes throughout the week. Costa entered fight week 30 pounds overweight and forced the UFC to negotiate a catchweight with Vettori.

Vettori will take 20% of Costa’s purse as a result of the hassle this week, and weigh in way over the 186-pound limit.

Check out their heated weigh-in faceoff below.

Both Vettori and Costa are looking to get back in the middleweight title picture after both fighters lost to middleweight champion Israel Adesanya in their last octagon appearances. The two fighters also share a similar style, and on-paper is expected to be one of the most exciting fights of 2021.

The added animosity between Costa and Vettori will certainly make things even more interesting with both men making their walkouts on Saturday. Vettori was not happy with Costa’s weight-cutting antics throughout the week and is looking to make him pay for it.

UFC president Dana White is probably not very happy to have the Costa vs. Vettori fight week go down as it has, but it’s expected to be a solid card overall. Grant Dawson, Jeff Molina, and Khama Worthy are just a few of the brawlers who will fight on the undercard of Costa vs. Vettori.

One thing is for sure, Costa and Vettori will have no love lost after this main event.

What is your prediction for Marvin Vettori vs. Paulo Costa at UFC Vegas 41?