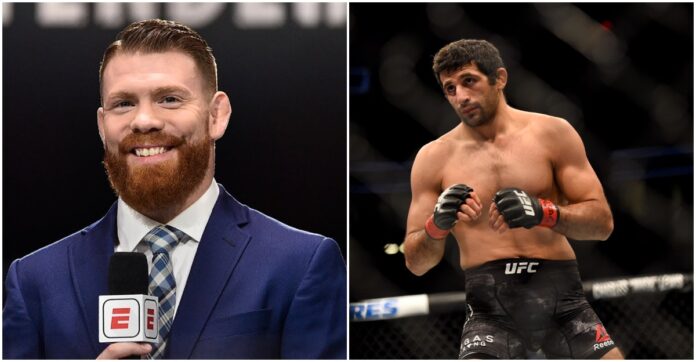 Charles Oliveira has had incredible success since being the man at the top of the lightweight division. After defeating Michael Chandler, Dustin Poirier, and Justin Gaethje it’s difficult to assess who will be the next contender to end his notable 11-fight-win-streak.

With many being under the impression that Islam Makhachev will be the lightweight contender to defeat the Brazillian, Paul Felder is banking on Beneil Dariush to be the one to cause Oliveira problems.

The former contender-turned-analyst thinks the aggressive Dagestan wrestling will play into Oliveira’s favor, with the Jiu-jitsu specialist being comfortable on his back.

Darius was scheduled to face Makhachev earlier this year in a bout that would solidify either competitor as the next in line to challenge for lightweight gold. Unfortunately, Dariush was forced to withdraw due to injury.

Makhachev ended up fighting Bobby Green, which saw the Russian win with ease and continues to make his voice heard of earning the next shot at Oliveira. Since then, Oliveira has been stripped of his title after missing weight at UFC 274 prior to his clash with Justin Gaethje.

Felder backed up why he felt Dariush would cause more issues to Oliveira than Makhachev.

‘I am retired, so it can’t be me, but dare I say someone like Beneil Dariush is more of a threat to [Charles Oliveira’s] particular style,’ Felder explained on The Fighter vs. The Writer.

“Because — and vice versa, I said the same thing when Khabib [Nurmagomedov] was still around — I always said that I thought Charles would be one of the bigger threats to him because of his style and the way he grapples and accepts bottom position but is so dangerous from there.”

Do you agree with Paul Felder here?