LowKickMMA.com
Home Bellator News Paul Daley Says He Might ‘Have To Drag Nick Diaz Out Of... 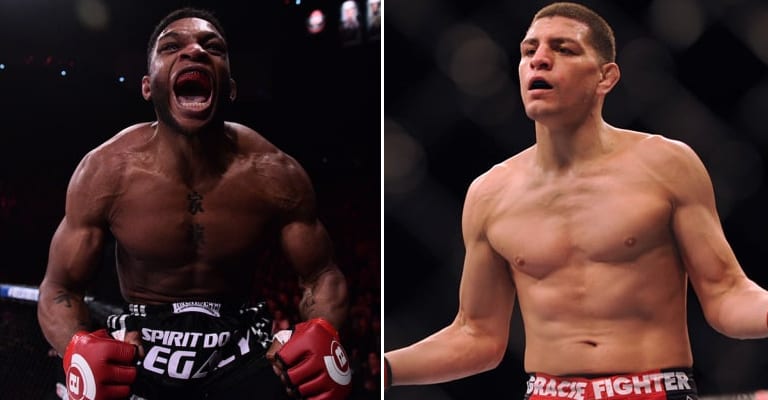 In recent months, Paul Daley has repeatedly voiced his displeasure towards his employer, Bellator MMA. Following a decision loss to Jon Fitch at Bellator 199 earlier this month, however, Daley implied that the situation is a bit better, adding in the fact that he’ll be having a meeting with Bellator President Scott Coker later this week:

“You know what it was? Fight week, I managed to spend a little bit of time with Scott Coker,” Daley revealed Monday on The MMA Hour. “It was a little bit awkward, and it seemed like it was very awkward for him to do what he did, but it got my respect in that he went around the room and I could see he was like, ‘Should I approach Paul? Is he going to do something crazy or not?’ But in the end, he came over and we exchanged some words.

And not only will Daley be meeting with Coker, but he confirmed that his relationship with his boss is now in a more ‘promising’ state:

“Very promising,” Daley said. “Just the fact — like I said to you when I spoke to you last time, I’d never spoken to Scott on a personal level apart from pre- and post-fight press conferences. So for him to make time, come over and say, ‘Look Paul, I’ve heard what you’ve been saying, I do want to sit down and have a chat with you’ — he wanted to do it there and then. I’m like, ‘I’m cutting weight right now. Can we do it maybe some time in the future?’ So we set the date for Friday at Bellator 200.”

In regards to his fight against Fitch, the contest was a bit lackluster to say the least, as it provided little action other than an outburst from Daley at the end of the first round. Other than that, however, the 35-year-old Englishman was controlled on the ground by Fitch for the majority of the fight.

Speaking to that, Daley didn’t seem happy with how the referee handled the action, implying that someone had it out for him that night:

“Someone didn’t want me to win that night. Someone didn’t want me to win. I know as an MMA fighter, yes, it’s up to me to make an attempt to bring the fight where I want it or whatever. But it’s also up to Jon Fitch to try to finish the fight or do something, advance position, which he really wasn’t trying to do, or something. I feel like I was up against it that night. Up against the ref, up against Bellator, up against the home crowd.

“If that fight was in England, maybe Marc Goddard as a referee, maybe (Mike) Beltran as a referee, there would’ve been a lot more breaks in action, where the ref would’ve said, ‘Enough’s enough. Four minutes of doing nothing, Jon Fitch, you ugly bastard. That’s enough of your stalling on the ground with your pitter-patter punches. Stand back up.’ Or something. There would’ve been more moments for the fans to see like that 30 seconds that we got at the backend of the first round, and if that would’ve happened, he would’ve gotten knocked out.”

Moving forward, it appears as if Daley expects to remain with Bellator and fight out his contract. He made it clear that he would like to remain active, while also saying that he’d like a bout against Michael Page to finally come to fruition.

In addition, Daley also called out one of the biggest names in the sport and a man he lost to back in 2011:

“Who knows?” Daley said. “I’ve got two fights on my contract. We’ll see what Bellator does. I had a lot of promises at the start. Hopefully the meeting with Scott next Friday goes very well and we can sort things out, we can make entertaining fights that can keep me active as promised, allow me to do kickboxing for Bellator Kickboxing as promised, and we can get a lot of things done. Otherwise, I’m going to have to drag Nick Diaz out of rehab.

“I heard he’s in rehab, he’s having a tough time, so I’ll have to drag his ugly ass out of rehab and get the rematch with him and put on another entertaining fight for the fans. And who knows, maybe we get Nick Diaz over to Bellator. Maybe I do these two fights, I go across to the UFC and help the dude out. We’ll see what’s up.”

Obviously, this fight is highly unlikely to take place given Diaz’s current status, but it’s certainly an interesting idea presented by the man known as “Semtex”.