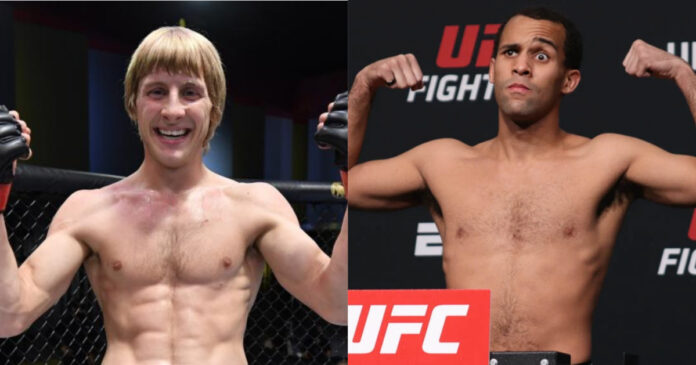 The UFC’s newest rising star, Paddy Pimblett predicts a first-round knockout over his next opponent, Jordan Leavitt on July 23 in London.

After a first successful trip to UK soil after the Covid-19 pandemic back in March, the UFC is set to return next month, with the man who received possibly the best reception, Paddy Pimblett, again featuring on the card.

‘The Baddy’ will return against ‘The Monkey King’ Jordan Leavitt, an awkward fighter who holds a 3-1 record inside the Octagon, two of which have come by stoppage.

Although Leavitt poses a real threat and his unique style has the potential to make it a tough night for Pimblett, the Scouser is confident that he will stop Leavitt in the first round.

Despite being more known for his grappling prowess, since linking up with his boxing coach Chris Williams, Pimblett seems to have much more confidence in his hands and believes it will be enough to put Leavitt away in the first round.

“I don’t even know that much about him, to be honest. He’s a black belt in jiu-jitsu, he’s 3-1 in the UFC. As I say he’s a black belt, so that’s the best thing he’s got going for him. I’m gonna knock him out on the feet, in the first five minutes more than likely.

“That’s it. I’m gonna go out and put it on him in a big way. He’ll wilt under the pressure in the first or early in the second and I’m gonna finish him, simple as.” (H/T GiveMeSport).

Jordan Leavitt seems to pose the biggest threat to Pimblett in his UFC career so far, as the American is only 27 years old and has never been stopped in his MMA career, amateur or professional.

“He has a very good eye for the finish and I think he has legitimate power and legitimate finishing ability but I think at the end of the day, my fundamentals are a little bit more crisp and I do think I just have a few attributes he’s not prepared for,” he told LowKickMMA.

Who have you got, Paddy Pimblett or Jordan Leavitt?