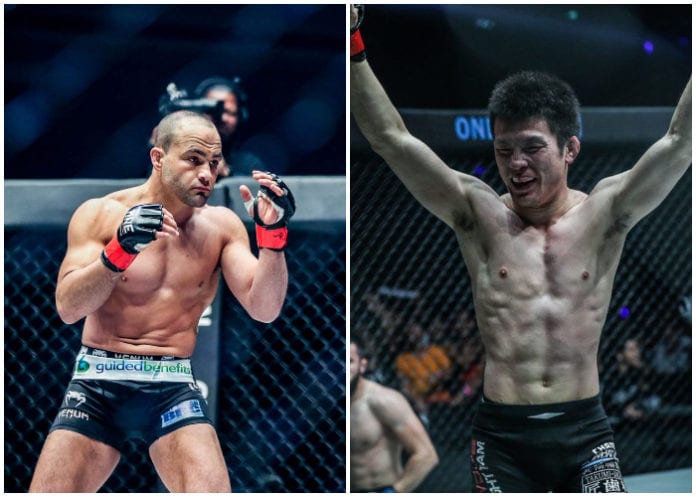 From the moment Eddie Alvarez arrived at ONE Championship, a matchup between him and Japanese veteran Shinya Aoki has been on the cards.

Alvarez and Aoki have faced off twice in the past— their first bout took place in 2008 in Japan and the rematch in 2012 in the USA—and with the score tied at 1-1, it looks like ONE CEO and Chairman Chatri Sityodtong is keen on seeing a decider.

Sityodtong discussed the fight during a podcast with ONE’s Michael Schiavello and Miesha Tate. The trio of ONE heavy-hitters were discussing the promotion’s new rankings system, which currently has Aoki in the fifth and final spot of the ONE lightweight division and Alvarez unranked—to Sityodtong’s surprise.

“I actually disagree with the rankings. I think Eddie should be number five. To finish Eduard Folayang the way he did. I know he is only one and one in ONE Championship, but he finished Eduard Folayang in very impressive fashion,” Sityodtong commented.

The ONE head honcho then went on to share his enthusiasm for a third contest between Alvarez and Aoki.

“He [Alveraz]has beaten Shinya before, they are one and one, if I had to flip a coin, I would put Eddie at number five and Shinya at number six, but that being said, yeah, I think a trilogy match would be incredible I think the world would love it. They are one apiece, and let’s see who is the dominant champion.

On paper, the matchup makes a lot of sense. It would be entertaining fight fans would be into; both men are coming off wins, and after the unscheduled break ONE is undergoing due to coronavirus, both fighters will be well-rested and ready to put on a show.

The bout provided it is fought outside of Japan or the USA, would also have the bonus of making MMA trivia lists. After all, there cannot be too many trilogy fights that have taken place over three decades in three different countries.

Hopefully fans will be hearing more about this possible bout in the future.

Would you be excited to see these two square off one more time?