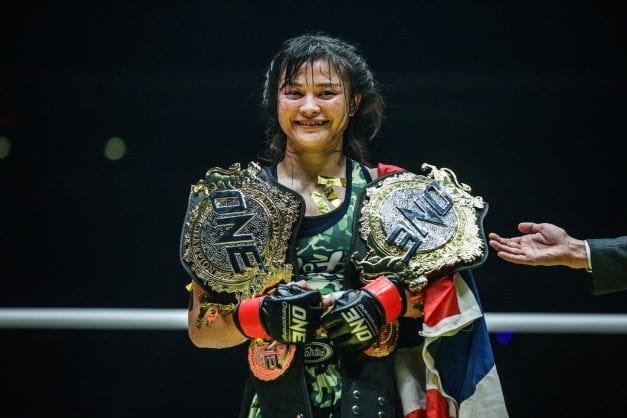 Thailand’s Stamp Fairtex made ONE Championship history today in Singapore, by capturing the inaugural ONE Atomweight Muay Thai World Title at ONE: Call To Greatness.

Stamp defeated American Janet Todd via unanimous decision and in doing so become the promotion’s first two-sport champion. The 21-year-old is also the ONE Atomweight Kickboxing World Champion. Stamp came into this bout as the overwhelming favorite. However, she was forced to work hard for the win throughout the five-round affair.

The opening round started as expected with the Thai looking relaxed and in control as she eased her way into the fight. A number of Todd’s kicks were caught by Stamp, allowing the Thai the opportunity to counter with heavy shots.

Todd switched up her gameplan in the second. The Californian native lessened her kicking output and began delivering impressive punching combinations of her own.

Stamp was still edging the exchanges but Todd’s attacking output meant the Thai was unable showboat the way she did when she claimed her kickboxing crown.

The final round broke from the script with Todd pouring on the pressure, forcing Stamp onto the back foot and making the Thai look vulnerable. Stamp kept her composure during Todd’s offensive surge. When the final bell rung she was the deserved winner.

We now know the makeup of the first Lightweight Grand Prix semifinal bout.

Costa Rica’s Ariel Sexton and Turkey’s Saygid Guseyn Arslanaliev will square off later this year after emerging victorious from their quarterfinal encounters today. Arslanaliev needed less than a minute to dispatch veteran Ev Ting. The 24-year-old dropped his adversary with his first punch of the night. The referee then waved the contest off after the Dagestani fighter began raining down blows on Ting.

Saxon win was less straight forward than Arslanaliev’s. The BJJ black belt submitted Singapore’s Amir Khan in the third round but took a number of heavy shots before getting the stoppage.

Arslanaliev should be a cracking bout, but Arslanaliev hits a lot harder than Khan. Saxon will want to avoid having to rely on a strong chin to get past the Turkish fighter.

An MMA Legend Rolls Back The Clock

Do not write off Masakazu Imanari just yet. Tonight he showed there is still life in the old dog with a first-round submission win over undefeated South Korean Kwon Won Il.

The 43-old, perhaps playing to the gallery, attempted three Imanari rolls in the first minute. The first two failed but the third did the trick, and Kwon tapped out with 53 seconds on the clock.

ONE: Call To Greatness Full Results