LowKickMMA.com
Home Combat Oblique Kick – Everything You Need To Know 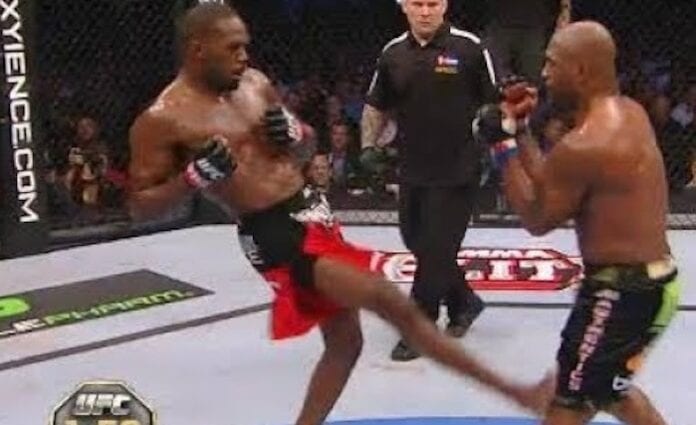 It’s a technique that makes fight fans cringe every time it is done. When a fighter takes this kick it makes your knee hurt seeing it land. The technique we’re talking about is the effective and infamous oblique kick

This is a brutal technique that is still somehow legal in MMA and is used by some of the most elite fighters. It stops a fighter dead in their tracks buckling their knee and potentially causing serious damage.

Once a fighter gets hit with this kick, they aren’t the same fighter as they were before. With that said here is everything you need to know about the oblique kick. Everything from when it was created, the mechanics of it, and tips for how to throw it in different techniques,

Who created the oblique kick?

No one martial art can really take credit for creating the kick, but it is used in multiple martial arts. Striking martial arts such as kenpo karate and savate kickboxing teach it in their curriculums.

Although many credit wing chun, a form of kung fu for first developing the oblique kick. This form of kung fu is a defensive martial art that relies on being relaxed and delivering swift strikes.

Wing chun experts would use this kick to offset an attacking opponent by delivering a debilitating strike to their knee.

The move was popularized in MMA by all time great Jon Jones. You can see him use the ove quite often in all of his fights.

Delivering swift strikes that has torn multiple opponent’s knee ligaments. Although he calls the move a push kick to the knee. Crediting Joe Rogan for coming up with the name oblique kick.

How does the oblique kick work?

People call the move the oblique kick, but let’s be honest. It’s really a push kick to knee.

The oblique kick works as a defensive kick to offset an opponent pressing forward. This kick is similar to a push kick or sidekick, but thrown at the opponent’s leg.

Should the oblique kick be banned?

Since the technique has become popular and used by many fighters it has also come with controversy. This kick has damaged quite a few fighters’ knees from Robert Whitaker, Thiago Santos, Stephen Thompson, and Yoel Romero.

With the oblique kick injuring multiple fighter’s knees many have called for the move to be banned. They feel that since the move is banned in kickboxing that it should be banned in the UFC.

Others like Tristar coach Firas Zahabi feel that it is a legitimate move that fighters should learn to defend. His feeling is if you stand in a sideways stance leaving only your knee open it should be fair game.

The great thing about the back leg oblique kick is that you can set it up in many different ways. It is an illusive kick and It all starts from when you bring your knee up.

When you bring your knee up the opponent doesn’t know what you’re going to throw. Could be a roundhouse or front kick, so they aren’t sure what to defend.

The best time to throw the oblique kick is when your opponent is pressing you. As they’re coming forward you bring your back knee up and turn your foot outward.

Be sure when you throw the kick that you throw it straight at the part of the leg you’re targeting. Also hit them with your whole foot.

If you just hit them with the arch of your foot it will bruise your foot and affect your movement.

Where you land the kick depends on the angle you have on your opponent. When they’re right in front of you, the target for the kick is the opponent’s thigh muscle right above their knee.

Repeatedly hitting this muscle will cause bruising and swelling hindering their movement.

If you angled on the inside or outside of the opponent, this kick will usually target their knee. Striking the opponent there is most likely to cause tendon damage to the opponent’s knees possibly immobilizing them.

The Muay Thai style front kick called a teep can also be used to attack the opponent’s leg. Bring your knee up and target the thigh muscle above the opponent’s knee.

Though be careful if you try this technique, because you have to be extremely accurate when throwing it. In a normal oblique kick, you turn your foot sideways giving you more area to land the kick.

With the technique your foot stays straight, so remember that before using this technique. Although a positive with this technique is that you can use either leg to throw the teep oblique kick.

The front leg oblique kick is more of a sidekick to the leg, but is just as effective. Maybe even more with the mechanics of sidekick delivering quite a lot of force.

Just like with every kick this one starts with bringing your knee up to your chest. Then you extend it out with force aiming for the opponent’s thigh muscle above their knee.

What is so good about implementing this technique is you can hide it and set it up numerous ways.

You can start by throwing a traditional sidekick to the chest or face. This will get the thinking about you throwing that kick to that location again.

When you set it up again, you can fake it to the body and go right to their head. Then once you get good at it, you can double up your sidekick going body-leg or leg-body. Even fake the sidekick to the leg and throw a hook kick if you’d like.

Another option you can do with an oblique kick is mix it in with your turning kick techniques. There’s two options you have with a turning oblique kick and it depends on the opponent’s stance.

If you’re both in the same stance, you sttak the back leg and if you’re opposite the front leg. Either way the movement is the same with the only differences being the direction you turn and leg you attack.

Once you have the space and find the range, you start by turning and looking over your shoulder. You have to see your target before you throw your kick.

Next step like always is to bring your knee up, turn your foot sideways and target their thigh muscle. It’s quite a tricky technique you can mix with turn sidekicks and spinning wheel kicks.

Hop up either bringing up your front or back knee to start the technique. This motion hides your attack and generally your opponent thinks an attack to their upper body is coming.

But you’re going to switch up bringing your knee up and throwing your oblique kick to their thigh muscle. Very sneaky technique to add to your arsonal.

You can watch the breakdown of these four kicks in this technique video.

How to defend the oblique kick

You should also know how to defend an oblique kick and there are two options you can use. The first is to take your leg away.

As your opponent throws the oblique kick, you can switch stances and take away their target. Countering with a jab or hook.

The next defense is checking. Just bring your knee up like your blocking  roundhouse and it will defend the oblique kick.

Tips for doing the oblique kick