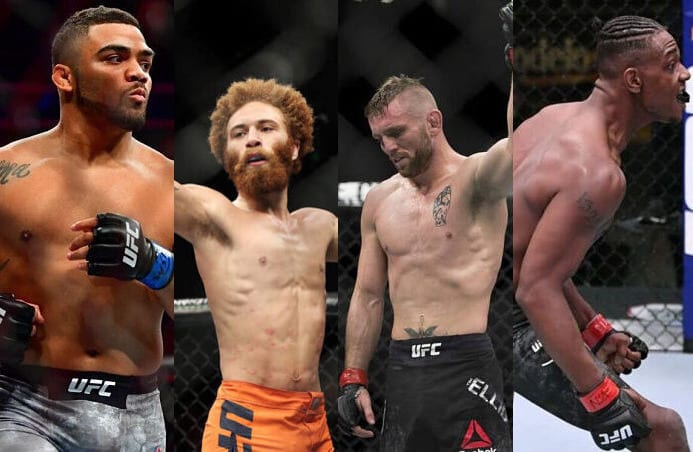 We all heard of four UFC fighters failing drug tests this past June. We were given their names, Jamahal Hill, Luis Pena, Tim Elliott, and Deron Winn, but their suspensions had yet to be determined. ESPN broke the news earlier today.

Hill’s first-round TKO victory over Klidson Abreu was overturned to a no contest, he was suspended six months, and fined 15% of his purse.

Both Elliott and Pena were suspended four-and-a-half months and suspended 15% of their purse. They each lost their respective fights, Elliott lost to Brandon Royval via submission (arm-triangle choke), Pena lost to Khama Worthy via submission (guillotine choke), so neither of their records change.

Lastly, Winn was suspended for nine months and fined $1,800 for his drug test failure at UFC 248. Winn lost to Gerald Meerschaert via submission (rear naked choke), so his record remains the same as well.

The most surprising name on this list has got to be Deron Winn, and because of what he tested positive for. It’s hard to imagine him doing something like that, he’s a lifelong athlete, he trains at AKA, it’s a wonder.

Winn did miss weight for his fight prior, and amphetamines certainly do aid in weight loss. Or maybe he just had a little cold and took some cough medicine, which will make you pop for that.

The dates of the tests is the starting date of their sentence. So basically, whenever their fight was, add their sentence to that and that’s how long they can’t fight for. Elliott and Hill both fought on May 30, Pena fought on June 27, and Winn fought on March 7.

It’s unfortunate seeing someones victory taken away just because of marijuana, but it’s great to see at least none of these names popped for a tainted supplement. That’s been a huge problem for a lot of fighters recently.