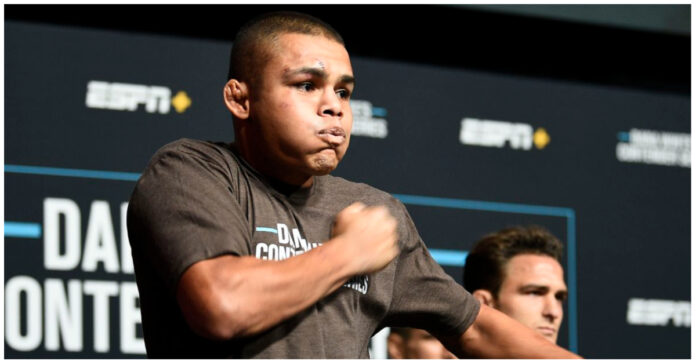 At UFC Fight Night: Sandhagen vs. Song, Nikolas Motta will take on Cameron VanCamp in the opening fight of the night.

In a recent interview with LowKickMMA, Nikolas Motta sat down to discuss his upcoming fight, where he will attempt to bounce back from his UFC debut in which he lost via TKO against one of the promotion’s most seasoned fighters, Jim Miller.

After already suffering one cancellation, Motta will now face off against Cameron Vancamp at the UFC Apex in Las Vegas, with both fighters coming off a knockout loss in their respective debuts.

The Brazilian feels this will be his “re-introduction” to the UFC fanbase claiming that he always comes back stronger after a loss, especially a knockout loss: “[every time] I lost I came back twice as better and when I lost by knockout I came back and knocked the other guy out.”

“Jumpman”, who is making the move from welterweight down to lightweight for this fight, will have a significant height advantage over Motta. When asked about Vancamp, “Iron” was very aware of the threat the Indiana-native poses against him: “I know he has good Jiu Jitsu, I think most of his wins are via submission, he’s a [tall] guy [around] 6’3 and I respect him.”

It’s clear Motta did his homework for his upcoming fight, out of Vancamp’s 15 professional victories; 13 of them come via finish, and 9 of those 13 finishes are via submission. But, those stats don’t seem like they’re going to slow Motta down; “I’m going to war, it’s my life on the line, and just like my whole career I put everything in.”

The matchup is set for 3 rounds to open up the prelims for UFC Fight Night: Sandhagen vs. Song, although both men are new to the organization, this bout could be one of the more interesting ones on the card as Vancamp will be looking to use his Jiu Jitsu and Motta will look to get on the inside of Vancamp’s reach to land one of his power shots.

When asked how he’ll get his hand raised on September 17th, Motta kept his answer short and sweet; “[by] any means necessary.”

What’s your prediction, Motta or Vancamp?