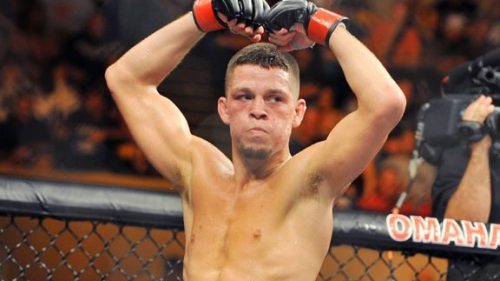 The return date for notorious UFC lightweight Nate Diaz is still an unknown, and his removal from the promotion’s official rankings probably won’t give his fans much faith. Last see knocking Gray Maynard out in the TUF 18 finals, Diaz has been inactive since, and very vocal about the reasons for that.

Taking every opportunity, Diaz has slated his employers for their poor treatment and payment of fighters. Zuffa LLC is no stranger to this sort of criticism, but there are fighters on both sides of the fence. Diaz’s manager Mike Kogan stopped by to talk with Submission Radio recently, discussing the topic of Diaz being dropped from the rankings:

“I understand the whole point of inactivity, but then there has to be some kind of consistency whether a fighter doesn’t agree to a bout or a fighter is injured, either way they’re inactive. So if you’re going to keep T.J Grant on there for a year and Dominick Cruz on there for two years and even Gray Maynard whom Nate beat at the same time as they fought each other, then why do you take this guy down? You  know what I mean? It just doesn’t make any sense. It makes sense to take off the inactive fighters to give way for the active fighters, but then there has to be some kind of a rule that’s been established and agreed upon and what have you by everybody.”

There is little doubt that Diaz’s attitude has contributed to his removal from the rankings, as Dana White recently said that part of the reason was a lack of correspondence. The problem that the promotion is faced with is that Diaz is a big draw, people like to watch him fight and talk trash. That being said, he clearly feels undervalued. Kogan continued:

“I had a brief conversation with Joe Silva and he said ‘well that’s not going to happen’ so I said ‘ok sounds good’ so we’ll just wait. Wait and see, but we don’t have a specific goal, we just want to be able to have a conversation and see what happens. Nate will be open to fighting anywhere where he’s paid the most and where his stock has the most value, but we are under contract with the UFC so it doesn’t really matter.”

Nate joins older brother Nick on the inactivity list, and both seem to have the same agenda in mind; get paid more or do no work. Whether this is a prudent tactic is yet to be seen, but you’d have to imagine that they may waste their prime. I can’t say that I disagree with the stance that Nate has taken, but he may find himself in limbo until retirement at this rate.

Should the Diaz bros suck it up and win some more fights, or are they deserving of a Gilbert Melendez type of deal?