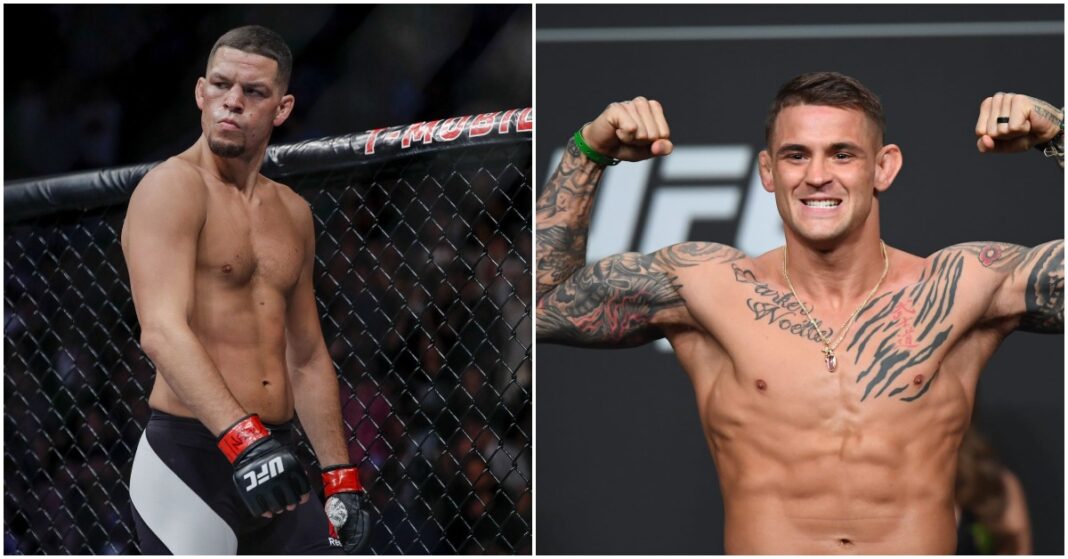 Nate Diaz took to social media to callout out Dustin Poirier regarding their highly rumored and anticipated matchup.

The pair have been linked to face each other for quite some time now and an increase in trash-talking over the last few weeks had fans believing we may get this matchup soon.

Poirier himself took to social media a few days ago telling fans that it was in fact Diaz who turned down the offer, not himself.

However, it appears there is more to it than just one party not wanting to fight as Diaz responded in a now-deleted post.

“You’re not worthy if you wanted to fight, we would have already. Bring yourself back from the dead you suck DP.”

This isn’t the first time the two have exchanged on social media, with both fighters originally claiming they wanted to fight each other in January, just one month after Poirier’s unsuccessful title shot against Charles Oliveira at UFC 269.

UFC president Dana White has already told fans that the promotion is happy to make this fight and with so much hype and excitement building around it, it only seems like a matter of time before they do.

What’s next for Nate Diaz and Dustin Poirier?

Although this is the fight too make for both fighters and the fans, were going to investigate what other options are waiting for these two in 2022.

Nate Diaz has already expressed his desire to fight in January, however the closer we get too it the less likely it appears.

Diaz doesn’t seem to be interested in fighting up the rankings or trying to rebuild towards a title shot, so if for whatever reason the fight with Poirier disappears the only fight that then makes sense is Conor McGregor. McGregor who is expected to be side-lined until summer of 2022 will be awaiting a high-profile matchup and what netter then to finish of the trilogy.

As for Poirier, whether he wants to push for another title shot is a decision he is yet to make it seems, however with the resume he has at lightweight there may not be many names that excite him the same. One fighter who Poirier clearly has an issue with is Colby Covington and given Poirier is reluctant to make the cut too 155lb now, this grudge match makes perfect sense.

Who do you think would win in a fight between Nate Diaz and Dustin Poirier?