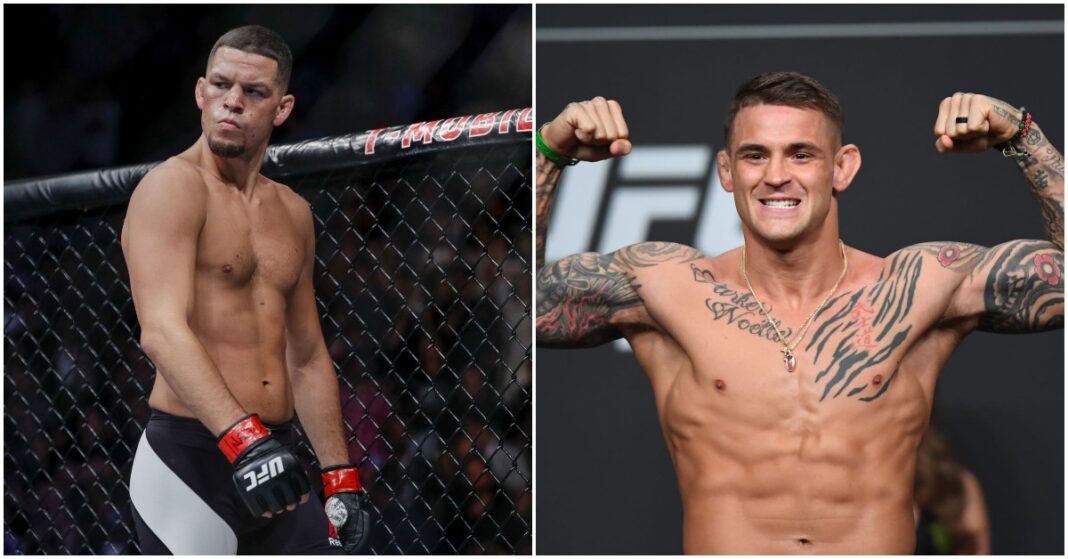 Nate Diaz has provided an update to fans regarding his potential long-awaited matchup against Dustin Poirier. Unfortunately, it’s not what fight fans will be wanting to hear as Diaz took to social media to share the announcement with his following.

” I just talked to the ufc I said wassup with the Dp fight I wanna fight asap but they said dustin sucks and they don’t want it sorry Dustin you suck hope to fight asap tho let’s do this 👊🏼 Ps – Olivera you suck too.”

Poirier Revealed He Agreed to a Bout with Nate Diaz

This announcement caught many fans off-guard especially given that earlier during the week Poirier spoke on an episode of ‘The Fight WTA’ to reveal that he had in fact accepted a short-notice matchup against Diaz.

“Hey, look! I don’t owe these guys (the UFC) nothing, man, I’m not biting my tongue,” Dustin Poirier said. “It is Nate Diaz. And just like he got on Twitter – I’m not gonna say what card, I’m not gonna say a date or whatever, but he got on Twitter talking, everybody’s a tough guy. This guy really fights – and I’m a fan of him. But everybody’s a tough guy on the internet.”

Poirier previously revealed after his loss to Charles Oliveira that the only fight that really interested him was a matchup against Nate Diaz, the pair were supposed to face off in 2018 but due to multiple issues that fight never went ahead.

From both parties calling each other out on social media wanting to fight each other, to a potential bout agreed announced by Poirier it now seems we are even further away from getting this matchup then we were to begin with. Give the fans the fight they want to see.

What do you believe is next for both Nate Diaz and Dustin Poirier?