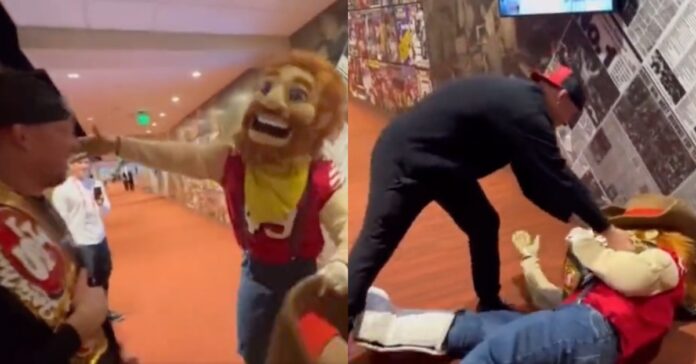 Fighting out his UFC contract last month, fan-favorite, Stockton native, Nate Diaz has continued his fighting exploits outside the Octagon – dropping San Francisco 49ers mascot, Sourdough Sam, before grabbing the championship belt and slapping it over his shoulder.

Initially scheduled to headline the T-Mobile Arena event against the undefeated, Khamzat Chimaev, Diaz refused to take a catchweight fight with the AllStars MMA staple, after Chimaev missed weight by seven and a half pounds.

Meeting Ferguson on just a days’ notice, Nate Diaz survived an early and midway onslaught from the impressive Ferguson, before he eventually wrapped up a fourth round guillotine choke win off his back after the Oxnard veteran miscued with a takedown attempt.

Yet to pen terms with a new promotion as he flirts with a move to professional boxing, or grappling competition, Diaz continued his striking exploits since his departure, however, taking in a game between the San Francisco 49ers, and the Los Angeles Rams at the Levi’s Stadium.

Sharing a picture opportunity with Sourdough Sam, Diaz then drops the team mascot with a right hand shot, steals his championship belt, before saying, “I’m sorry for hitting you” as the pair embrace.

Linked with a future boxing match against either Jake Paul or former UFC middleweight champion, Anderson Silva, Diaz is sure to have one eye fixed on the duo’s October boxing match in Arizona.

“Jake (Paul) is for sure one of the options,” Nate Diaz said. “He’s doing big stuff, he’s doing really big things and he’s got a big fight ahead of him and if he wins that I think people should surely be really impressed by it. If Anderson (Silva) does his thing to him that’s impressive also so we’ve got a fight on our hands and I’m looking forward to it.”