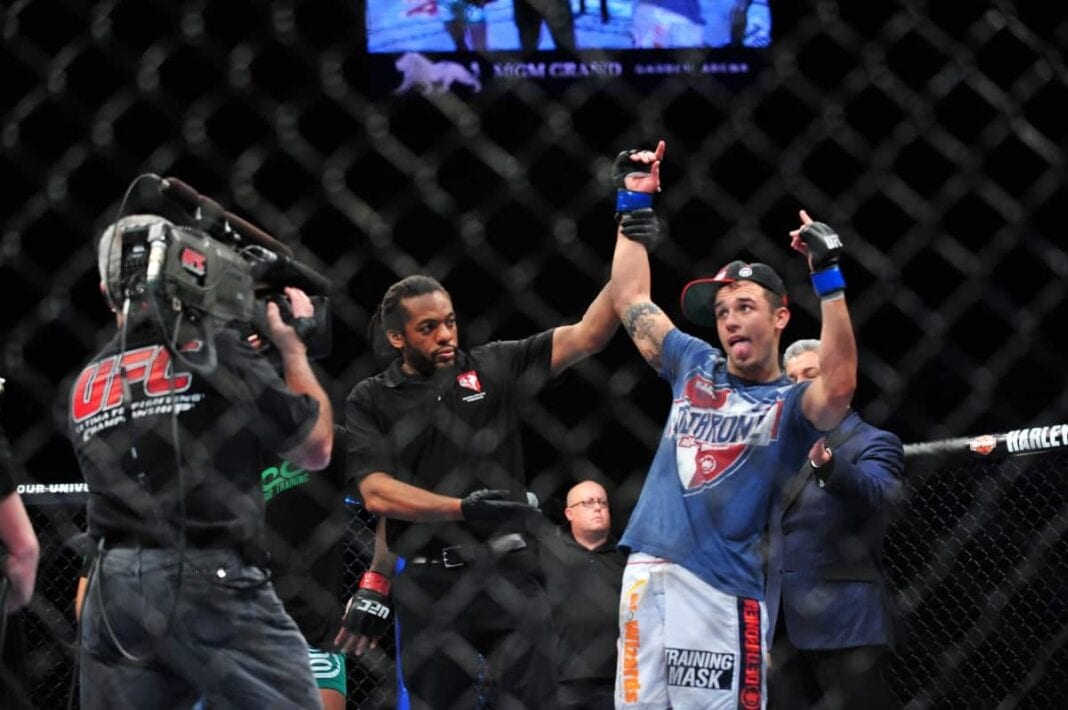 After picking up his biggest UFC win over Diego Sanchez at April’s UFC 172, No. 12-ranked lightweight Myles Jury looked to keep his spotless record intact against Japanese MMA legend Takanori Gomi at this Saturday’s (September 20, 2014) UFC Fight Night 52 from the Saitama Super Arena in Saitama, Japan.

“Fury” did just that, starching Gomi with a lethal first round TKO in a 92-second fight that barely got started. With his best days clearly behind him,  “The Fireball Kid” wondered if he would ever fight again.

However, Jury spoke up at the post-fight press conference (via MMA Junkie) to give his take on the topic, noting that Gomi, while aging, was still 3-1 in his previous four fights. While the knockout victory may not shoot him up the UFC rankings, it was still a notable win for his mindset:

“I really do not pay attention to any of the rankings. It’s cool that apparently I’m ranked now and stuff, but I feel like if I just keep doing the right things right and taking fights and getting better as a martial artist, they can’t deny me for the title forever.

“(Gomi) was 3-1 in his past four fights, and he’s always dangerous. So even if the people and the critics don’t move me up the ranks or whatever, I still think for a personal victory, it’s really good for my confidence, and I’ll be even better for the next fight.”

Always calm and confident, the 25-year-old Jury has never had a reason not to be. His striking looks crisp, technical, and precise, and he already has his own system of jiu-jitsu, proving that he’s wholly well rounded despite showcasing his stand-up skills in recent fights.

With a ton of elite challenges now awaiting him in the ultra-talented UFC lightweight arena, Jury knows that beating Gomi is just the beginning of his perceived rise up the rankings, but he deemed it a great start due to the amount of media attention the former Pride champion brings in:

“Fighting guys like Gomi is just good for my name, my brand, because everybody knows who he is. Everybody tunes in when he fights. So getting a win over him just kind of cements my name in people’s brain so they’ll remember me. Next time I fight, hopefully they’ll tune in.”

More people should be tuning in to watch Jury fight, because he’s been nothing more than clinical and destructive since returning from a debilitating injury on the set of The Ultimate Fighter (TUF) 15. The sky would seem to be the limit for Jury, yet the road ahead of him is long and arduous.

All of the sudden, the laid-back Jury is a dark horse contender in one of the most stacked divisions in all of MMA. Which top-ranked challenge will be up next for “Fury?”