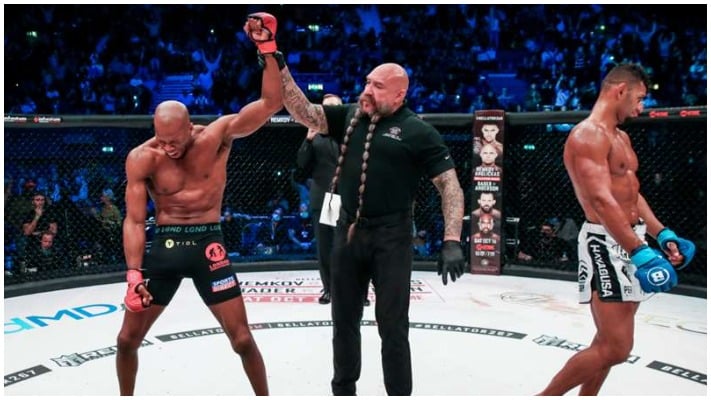 Michael ‘Venom’ Page (MVP) called for a third fight with Douglas Lima immediately after beating the Brazilian to avenge the lone loss of his MMA career at Bellator 267 on Friday night.

MVP defeated Lima in a close split decision, but it could’ve easily have gone the other way. The Englishman is now intent on booking a third fight with Lima over five rounds to prove he is the better man.

“In all honesty, I’ll probably push to run this one back again,” Page told reporters at including LowKickMMA at the Bellator post-fight press conference. “Let’s do five rounds, why not? Let’s go longer.

“If by the end of the third round that had happened again, I got two more rounds to find you and finish you properly. I’ve gone from one end to the other and hopefully, I find that balanced middle and finish him.”

MVP appeared to established himself as the welterweight number one contender last night but seems uninterested in chasing Bellator gold at the time.

“It’s a belt, who cares?” Page said. “How many people that are titleholders are nowhere near as popular as I am? The belt don’t mean anything. It does obviously, but for me, it doesn’t. That moment right there (the decision win over Lima), there’s so many Bellator belt holders that can’t pull off what I did today.

“I feel like people are drawn to me because of my enjoyment of the sport, not because I’m chasing anything. It’s about my journey and pushing myself. I didn’t get to prove that today. I won but I didn’t make his eyes roll to the back of his head and not get back up. I know I can do it, so I prefer to run it back.” (Transcribed by MMA Junkie)

Do you want to see MVP vs. Douglas Lima III?