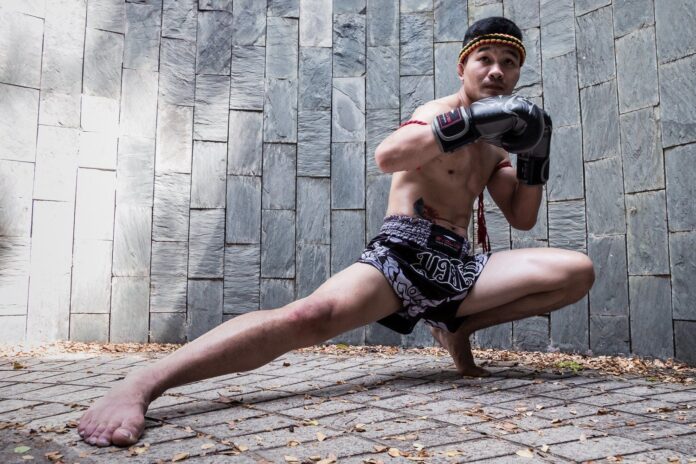 Muay Thai (Thai Boxing), also known as “The Art of Eight Limbs”, is a national sport in Thailand with roots dating back to the 13th century. This is also one of the most widely-practiced sports in Thailand, and it plays an important role in modern MMA fighting. Even countless research studies have been done on the sport’s movements and speed. Many children in Thailand learn Muay Thai and usually start very young, some as early as six years old. Often, these children have at least one parent who is a professional fighter. Todd Kellstein’s documentary film “Buffalo Girls” does a remarkable job of providing an insight into what it’s like for two girls growing up in this environment.

Stam and Pet – The Buffalo Girls

“Buffalo Girls” starts with a beautiful wide shot of empty rice fields that gives the viewer a sense of peace and serenity. The director then cuts the scene to an empty boxing ring that is gradually being cleaned. The emptiness in both shots emphasizes the absence of people, be it the toilsome labor of the farmer or the nimble movements of boxers.

The boxers in this film refer to Pet and Stam, two eight-year-old girls who compete in Muay Thai matches for money, Both girls fight to help their families. Stam is determined to help her parents build a house, while Pet’s goal is more personal. Two years before the documentary began filming, Pet underwent heart surgery, and her mother shaved her head to symbolize victory. Besides helping her parents financially, she also wants to prove that she can survive after heart surgery.

Although Kellstein films both girls fighting, he doesn’t use close-ups instead, he uses wide shots, primarily focusing on family dynamics. He also cuts out the sounds of fighting and cheering, replacing them with music. Immediately after Pet and Stam’s first match, and a request for a rematch worth 100,000 Baht ($3,333), it becomes clear that this is not just about a girls’ Thai Boxing fight. This is a professional Muay Thai match where people make money by betting on the winners. Although Stam and Pet do not receive severe injuries, one spectator does state that broken limbs are a regular occurrence among Thailand’s 30,000 child boxers.

All Bets Are On

Gambling provides the only source of income for the protagonist’s families. It acts as both protagonist and antagonist in the movie. While Stam and Pam do not gamble themselves, everyone else does, including their parents. There is a notable scene involving Stam’s father telling her she needs to win because he bet money on her. In fact, there are several moments throughout the film when the camera focuses on Stam’s face during the breaks. The scene is enhanced by voices telling her to use her knees and stop slouching. This highlights how crucial winning is and that losing is not an option when the stakes are high.

When watching Buffalo Girls, one feels as if they are gaining a greater understanding of Thailand and the gender struggles that exist. Every now and then, you can catch a glimpse of Pet’s difficulties with her gender identity, all connected to the fact that she is often mistaken for a boy due to her shaved head. Even her grandmother teases her about it, especially when she cries after losing a fight, followed by the words, “Boys don’t cry.”

This is amplified by an interview in which one referee says that female Muay boxers are very popular in the country in response to why so many women practice Muay Thai.

The Story of Anguish and Empathy

After watching the movie, you might need help understanding the girl’s parents, especially when Pet’s parents joke about leaving her behind after she loses a fight. Though they may seem heartless, the truth is that these “abusive cycles” often happen to families who live below the poverty line and have to resort to whatever means necessary to get by. Even though it’s clear these parents deeply love their children, they’re ignoring the fact that by making them participate in a dangerous sport, they are putting their safety at risk.

However, “Buffalo Girls” does not attempt to shame or judge people involved in the movie. Rather, it strives to help its audience understand why Stam and Pet, as well as their parents, would make such a choice. In other words, this film teaches us that absolute desperation knows no bounds and will make anyone its ally.