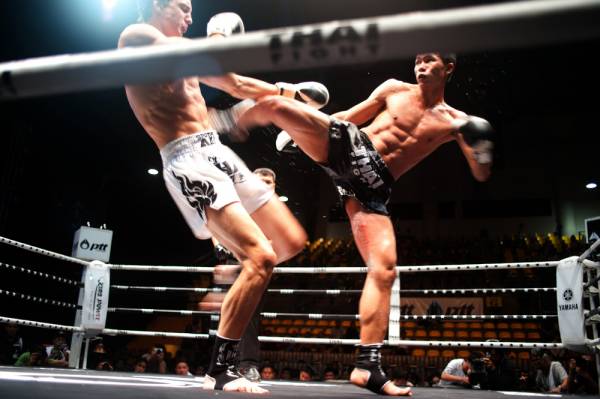 Although the roundhouse kick is perhaps the most common technique in Muay Thai, it is far from an easy strike to perfect. In order to master the roundhouse, a fighter must have command of their body. In other words, they should have the flexibility, posture, coordination, and balance which can be combined to pull it off. As any trainer will tell you, these areas should be addressed before even trying.

This should not be a deterrent to anyone, whatsoever. As cruel as it sounds, a fighter without the right blend of flexibility and balance will simply struggle to throw the kick. However, anyone hoping to be a fighter will undoubtedly understand that these areas can be improved with training. Regardless of how good your balance and posture are, you will need constant practice to master the roundhouse.

With these tips below, you can sharpen your understanding of every single aspect of the roundhouse – and with the right application – master this important strike.

There is little doubt that this is the final part of what will be the finished article. You must first understand how the body needs to be positioned – and how to generate maximum power – in order to get it all right. The roundhouse can be an absolute thunderous strike when it is performed properly, so it does pay to ensure you understand each and every important factor behind the kick.

Much like Major League Baseball players had to start at the bottom and work their way up to be able to hit home runs, in Muay Thai, Nak Muays must also start from somewhere. There has never been a case of a novice having the ability to throw the perfect roundhouse, so don’t worry if you feel as though yours is not on point. With the right time and effort, you will get there.

The Roundhouse Kick: The Right Technique

As any coach worth their salt will tell you, getting it right the first time is the most important thing to remember. Cutting corners or moving past a stage without first understanding and perfecting it will lead to flaws in your kick, which will, in turn, lead to flaws in your game. In Muay Thai, you cannot afford to display any weaknesses inside the ropes as these will be turned against you, brutally.

With that in mind, we should probably take a look at each of the stages you need to understand before you can execute the perfect roundhouse.

First things first. You must ensure you are standing in the correct stance. This means placing your weight on the balls of your feet, with your feet corresponding to the width of your shoulders. You want your feet pointing out slightly.

Before you can even consider throwing a roundhouse, you will need to be certain that your opponent is within range. If you cannot figure out if they are close enough to feel the impact of the shot, use push kicks to measure their distance. If you cannot feasibly reach them with a push kick, you are not close enough to land a roundhouse. Remember, you can practice measuring distance on a heavy bag or in sparring.

In order to land a roundhouse kick, your balance and posture must be right. Technically, the best way to do this, is to place your pivoting foot at a 45-degree angle. You should step outwards in order to place yourself in the right posture to open up your hip, which is integral to executing the kick. Another reason why it is important to find the right angle is to protect yourself against counters. Don’t forget it also helps generate power.

Muay Thai strikes rely on flexibility, balance, and generating power from the hips. When it comes to the roundhouse, things are no different. You want to create as much force in your kick as possible without compromising your balance and the speed of the shot. To create this force, you should step out and push up on the ball of your foot and keep it there until you have hit your target.

Stage 4: Build the Kick Into Your Natural Motion

Flowing rhythm and seamless movement are the hallmarks of a great Nak Muay. When it comes to the roundhouse kick, you will need both of these qualities to refine your technique. In other words, you will need to incorporate the kick into your natural fluidity for it to be effective and to cause maximum damage. Telegraphing any shot – or throwing it awkwardly – is not a good look.

In fact, it is probably the worst thing in the world to do inside the ropes. Muay Thai is a game of show and tell: you show everything and tell nothing. In order to break down your opponent’s defense, you will need to master the dark arts. One of the most important of these arts is hiding your next move. If you can learn how to do this, you will be on the right track.

Stage 5: The Whip and the Hips

Your power comes from your hips, there is no other way around it. Therefore, you must drill turning over your hips and moving them in the right ways to generate the power you want, every time. With the roundhouse, you want to twist and push forward in order to build power strong enough to cause damage.

And don’t forget how the whip comes into it all. When you throw a roundhouse, you want to whip your hand down your side in order to build force and keep you balanced. While it may sound difficult at first, with enough practice, it will become second nature.

Stage 6: Back to Your Stance

It is absolutely critical that you know how to return to your stance once you have thrown a roundhouse. The reason? Counter attacks. It is that simple. When you have thrown a roundhouse, you want to return to the same posture you held prior to throwing the kick. You need to be in a position which is not vulnerable to any other attacks, or to be ready to follow up on your initial attack.

As with any combat sport, resetting after an attack is important. Always be ready to slip back into stance.

Drills are everything. No novice fighter has ever walked into a gym and mastered a technique straight away. As cliched as it sounds, Rome wasn’t built in a day. The same applies to your skillset. By taking the right advice and practicing until it becomes second nature, you will undoubtedly unlock little fragments of progress, each and every day you apply yourself. It’s on you, so make it happen.