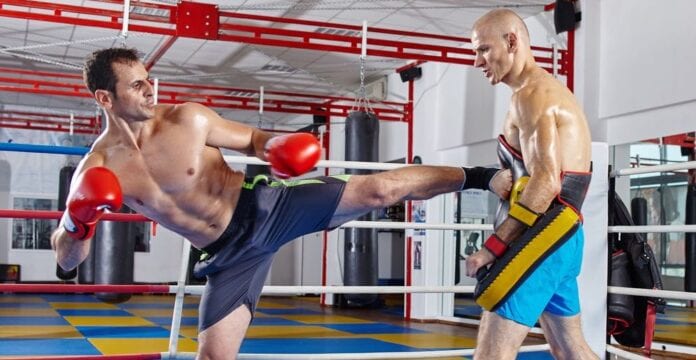 There are fewer weapons as crucial to master in Muay Thai than the push kick. Also known as the front kick, or teep, the technique is essential for any fighter with designs on improving their offense or defense in the sport.

Without it sounding like a lazy comparison, the teep is almost as important as the jab is in boxing. While everything in the “Sweet Science” is developed from the jab – from measuring distance, throwing power shots, and so on – the push kick works exactly the same way in Muay Thai. It can be used to wear an opponent down and literally push them into the ropes and corners. Alternatively, it can be used to decoy or feint.

Unlike boxing, attacks in Muay Thai can be executed from longer distances (using the legs). In this case, the teep can also be employed to measure range and prevent an opponent from getting too close. There are a number of uses for the kick, which makes it beyond important to understand. Even from a defensive aspect, mastering the push kick may be the greatest thing a Nak Muay can do.

There are a number of different types of push kicks which you could look to use throughout the course of a fight. Depending on what the situation calls for, you may find a particular variant of the kick works well in certain scenarios.

The most basic (and most common) technique – which we will break down below – is the front push kick. Additionally, there are:

Lets take a look at each one, individually.

As we discussed above, this kick can be used in many different scenarios, both defensively and offensively. You can use this kick as a measuring tool to gauge range or to set up attacks. It can be a means of keeping your opponent from getting too close, targeting their midsection to wind them or push them back in order to reset.

The kick can be executed from either leg (a front or rear front push kick) giving a fighter the opportunity to vary the power which goes into the technique. The lead push kick is naturally a lot quicker to throw, much like a jab, as you do not have to switch. It is also a lot more difficult for your opponent to see coming.

The rear leg push kick is a different weapon altogether. You can generate more power with the kick, which is likely to cause more damage to your opponent as a result. A common technique used by high-level Nak Muays is to feint a roundhouse before throwing a rear leg push kick.

The Side Push Kick

This weapon is a potential showstopper and a technique which became the trademark of perhaps the greatest Nak Muay of all time, Samart Payakaroon. What makes the side push kick so potent is the power which can be put into the kick, and the extended range it can be thrown from. The technique involved in mastering this kick will take time, but with the right practice and execution, a side push kick is a very dangerous weapon.

The best way to give a mindless opponent something to think about is a slapping push kick. It is very difficult to argue with this shot, on account of how quickly it can be thrown and how difficult it can be for an opponent to see coming. If a fighter is trying to close the distance too quickly, a slapping push kick can be thrown into their oncoming attack, forcing them backward.

The kick is landed by using the sole of the foot to stamp into the midsection of the opponent, or even the head and shoulders.

Undoubtedly the most fan-friendly variant of this kick is the jumping switch technique. That being said, it is highly technical and is favored by Muay Femur fighters (especially Saenchai). Expect years of hard work before you manage to master this kick as it will take hour after hour of drills and a deep understanding of the theory before it becomes embedded into your mind and muscle memory.

This kick can be landed following a feint, which really gives it a sense of unpredictability which can be ultimately devastating to an opponent who doesn’t see it coming.

How to Throw a Push Kick

Like anything in Muay Thai, mastering the basic elements of a technique comes first. Half-hearted attempts and lazy execution can be catastrophic against an opponent who has seen it all before. Therefore, it is important to familiarize yourself with how each and every component that goes into the teep contributes to the final product. As a fighter, you always need to start from the bottom and work your way up.

Once again, like anything in Muay Thai, it is always better to get your posture and balance right as early as possible. As both of these qualities determine the strength of your teep/push kick, you will find your execution improve the more flexible and fit you are. Your legs should be well conditioned and strong, in order to generate maximum power.

One of the first things a trainer will want you to practice before you throw a push kick is your posture and balance. Both are integral to mastering this kick. If you struggle to stand on one leg, or have difficulty with flexibility, you can be certain that you will find even this most fundamental technique beyond you. Let’s say that your balance and posture are good. If so, here is what you need to do:

If you follow the pointers above, you should be able to develop a sweet push kick with frequent practice. As we covered above, this kick is perhaps the most important strike you can master in Muay Thai. Once you are comfortable throwing the push kick, you can mix it up by using it in feints and decoys. The most crucial thing to remember, however, is to get the basics right before you try to emulate Saenchai or Samart.