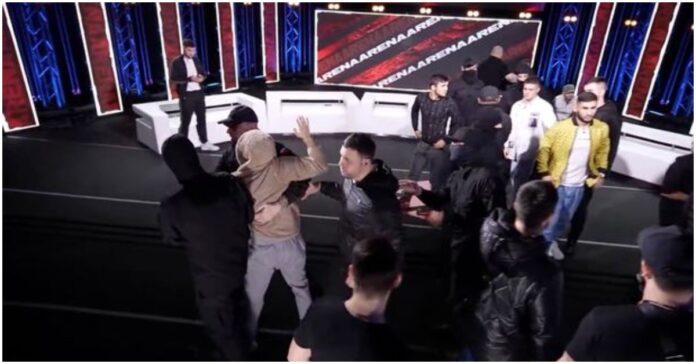 In what seems to be becoming a familiar theme a Russian MMA press conference crumbled into chaos when two fighters began going at each other live in the studio.

In the video which has gone viral, a man can be seen attacking another fighter after tempers flared on stage. One of the men initially begins to walk over towards another one of the men sitting down on the stage.

Before you know it the man walking over swung at the man sitting down as a fight began to break out. Security was quick onto it and got onto the stage to stop anyone from getting seriously hurt or injured. After taking a quick look viewers could see the shock in members of the audience’s faces after having just seen this unfold in front of them.

This isn’t the first MMA promotion to experience this kind of issue with it becoming a regular occurrence among some amateur organisations. However, there is a serious need to crack down on any violence occurring before they fighters’ step inside the cage.

The video can be found here.

Although some pushing and shoving at a press conference would seem normal to most as not long after the two facing off against each other will step inside a cage to try and take the other man’s head off. There does need to be more done to prevent MMA fighters from having these altercations.

UFC President Dana White spoke on this issue following the incident with Jeremy Stephens and Drakkar Close which saw the pair’s matchup cancelled due to an injury picked up by Klose at the press conference.

“There is a rule,” White said. “That’s why we’re there. Sean Shelby missed that one. Sean and I see this thing differently. I saw it on social media and called him immediately. “I saw the thing happen on social media and I called Sean and I was like, ‘Where was your head on that one?’ He was coming in hot and it’s Jeremy Stephens, he’s a savage.

“I mean, we’re not standing there to look good and take pictures. We’re there to make sure that doesn’t happen.” (Transcribed by Dailystar.com)

What can be done to stop these incidents from occurring?