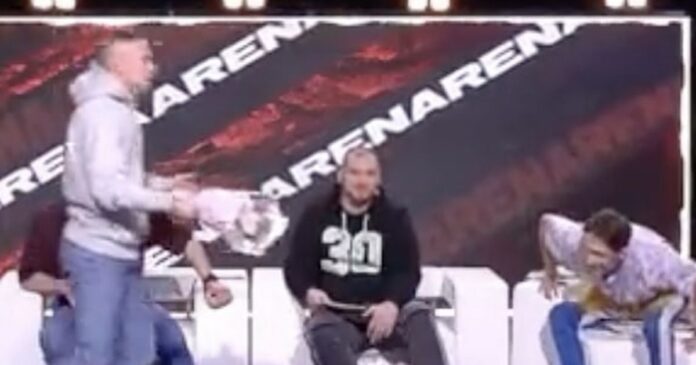 A mysterious Russian MMA fighter is making headlines today after one of the most unusual assaults we’ve seen at a press conference to date.

The whole thing was captured on video, taken from a press conference held by a Russian promotion thought to be called “Arena Fighting”.

That doesn’t stop the action, as the original aggressor takes his opponent down, as security and even another random fighter intervened to split them up.

Things seem to calm down once the two get separated, but all of a sudden the MMA fighters get back into it again, and the gift giver seemingly lands or barely grazes the recipient with a spinning back kick. Unfortunately for the man who was given the gift and assaulted, security was about to rough him up too.

One of the security guards can be seen getting the gift recipient in a rear-body lock, before fully raising him up and channeling Rampage Jackson’s aura with a vicious slam.

Russia is known for having some of the wilder MMA promotions. Including Epic Fighting, which is known for putting on purposefully mismatched fights, or “Freak Show Fights”, including male vs female bouts.

One such fight saw a female MMA fighter take on a 530lbs man. While another featured a female fighter named Yulia Mishko who took on a 75-year old man and his 18-year-old grandson at the same time… and she won.

Is freak-show fighting becoming the most disturbing new MMA trend? Give us your thoughts in the comments below!