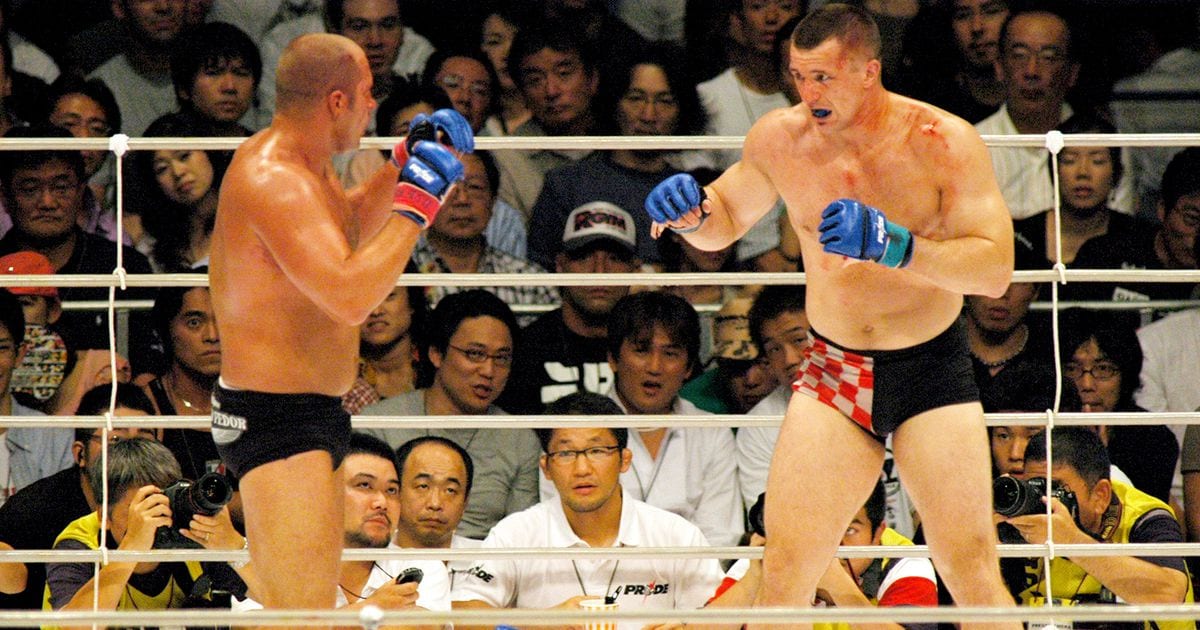 Legendary heavyweights Fedor Emelianenko and Mirko “Cro Cop” Filipovic are now both competing under the Bellator banner, but according to “Cro Cop”, don’t expect a rematch between the two to take place:

“People are asking me all the time about that, but I don’t think about that right now. And I don’t think that fight will happen,” Filipovic said Thursday on a Bellator 200 conference call (transcribed by MMAFighting.com).

“It’s hard to say. There is no — I don’t have some special desire to fight him anymore, like I had before. Never say never, but I don’t think that fight will ever happen.”

The two first met in 2005 at a PRIDE event at the Saitama Super Arena in what, at the time, was the biggest heavyweight fight in MMA history. And in the end, Emelianenko ended up winning the bout via unanimous decision.

Now years later, both men have followed different paths, but both remain highly recognizable names in the sport.

“Cro Cop”, for example, has spent the majority of the last few years competing under the Rizin banner in Japan. Currently, he’s riding an eight-fight winning streak and will next rematch Roy Nelson in the main event of Bellator 200, which is set to take place on May 25 in London England.

As far as that fight goes, Filipovic seemed as if he was impressed by “The Last Emperor”, although he also said that the bout was far too short to take much away from it:

“Well, it was a good fight. If he’s back or not, I don’t know,” Filipovic said. “It was too short. The fight was too short, but good for him.”

Given where each fighter is in his respective career, it doesn’t sound too outlandish to think that a rematch could take place in Bellator, although it’s also unclear how much longer “Cro Cop” will stick around the fight game:

“It’s hard to say,” Filipovic said. “In this business, it’s hard to say. I said a few times already, ‘I’m done, I’m done,’ and at the end day, I always decided to extend my career.

“I will just do it as long as it makes me happy, and as long as my health allows me to keep fighting. So it can be one or two fights, it can be three, I don’t know.

“There are a lot of injuries in this sport, so you never know, especially at my age. I am 43, but I feel so good right now.”

Would you like to see Filipovic and Emelianenko run it back at some point in the near future?