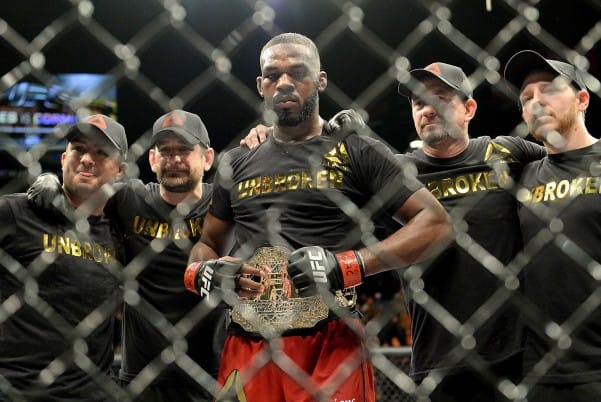 Ever since former UFC light heavyweight champion Jon Jones was stripped of the belt following his felony arrest on an alleged hit-and-run that left a 25-year-old Albuquerque, New Mexico woman with a fractured arm, talk has been circling as to whether or not the decorated fighter would return to the Octagon.

His manager Malki Kawa stated that Jones may not return, but his Jackson’s MMA teammate Carlos Condit said he had spoken to ‘Bones’ and he told him that he would. Yet apparently that’s still uncertain.

Speaking in a recent interview with Submission Radio, Jones’ striking coach Mike Winkeljohn said he wasn’t sure if Jones would return to the cage, but he was taking steps towards becoming a better person:

“I’m looking forward to Jon turning his life around and becoming a better person. If he fights again or not, I’m not sure.”

Winkeljohn also noted that while Jones obviously has a long list f legal troubles to sort through, he has returned t the gym and helped his teammates train, including help prepare Andrei Arlovski for his classic one round war with former Jackson’s MMA fighter Travis Browne at May 23’s UFC 187:

Asked if he had spoken with Jones after his controversial arrest and the resulting backlash, Winkeljohn said he had, and that Jones is doing the right things to get his life and career back on track:

“Oh yeah. Yeah, very good. He knows what we expect out of him, and you know right now it’s…I expect him just to continue doing what he’s doing and that’s take care of himself, do the right thing, take care of his family, and he is. I’m real happy on what he’s being doing so far.”

Although his decorated striking coach suggests Jones is on the right track towards returning to the UFC and possibly regaining his throne, he could also be telling his coaches what they want to hear.

He most likely did just that and got away with it as he balanced a successful professional life and a much more haphazard, wild personal life during his initial run as UFC champion, and maybe his coaches did or did not know what was going on when he left the gym.

In any case, Jon Jones may be saying all the right things, but actions will truly speak louder than words here.