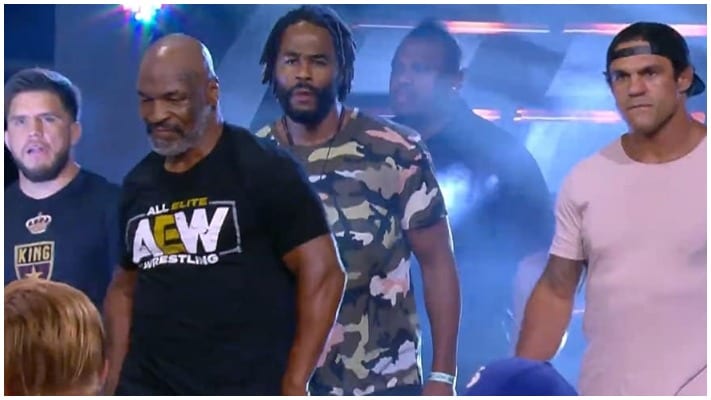 Heavyweight boxing legend Mike Tyson has taken a break from his preparations for a boxing comeback to team up with some MMA superstars and take on professional wrestling legend Chris Jericho in an epic brawl.

Tyson first appeared on All Elite Wrestling (AEW) this past Sunday to present a new belt. He returned on Wednesday evening and found himself involved in a brawl with Jericho. Luckily for Tyson, he had some serious back-up in the form of recently retired bantamweight champion Henry Cejudo as well as UFC legends Rashad Evans and Vitor Belfort.

This is not the first time Tyson has found himself in a wrestling ring with Jericho. In 2010 ‘Iron Mike’ teamed with Jericho for a tag-team match against Triple H and Shawn Michaels on an episode of WWE’s ‘Monday Night Raw’. The bout ended with Tyson switching sides and knocking Jericho out cold, hence the bitter rivalry at AEW 10 years later.

The 53-year-old is expected to return to the ring later this year to box. Despite being the subject of a $20 million offer to fight bare-knuckle it appears Tyson is set to return to the sport that made him. His most likely opponent is Evander Holyfield who followed Tyson out of retirement in the hopes of making a trilogy fight for charity.

While Tyson’s future in wrestling seems pretty non-existent the same can’t be said for some of his posse. ‘Triple C’ is now retired and seems to be a perfect fit for the wrestling world. Former light-heavyweight champion Evans is also retired from fighting and decent on the mic based on his various bits of television work for the UFC. Belfort although still, an active fighter could well be heading to wrestling too. Just a couple days ago he was speaking about arranging a tag-team match with Tyson after the pair were spotted training together.

Do you like to see ‘real’ fighters like Mike Tyson and Henry Cejudo cross over into professional wrestling?