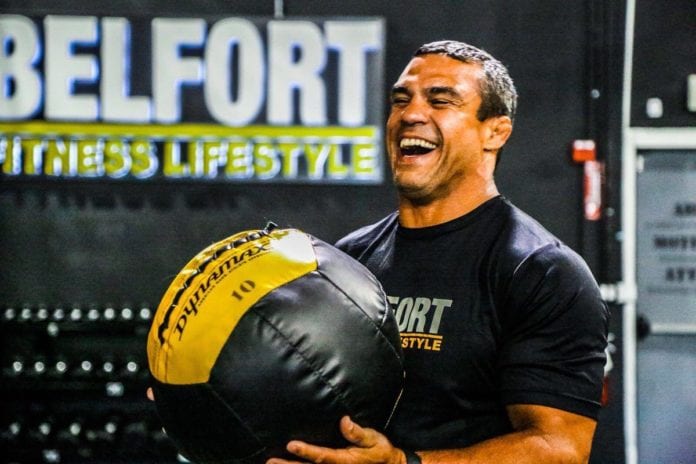 This past weekend All Elite Wrestling staged Double or Nothing inside Daily’s Place in Jacksonville, Florida. The pay-per-view event took place behind closed doors with only a handful of wrestlers and athletes watching from the sidelines.

One of those attending was MMA legend, Vitor Belfort. The Brazilian is friends with AEW’s owner Tony Khan. Following the event, Belfort called for Khan to book him as a tag team partner for Mike Tyson, who was on hand at Double or Nothing to award the AEW Championship belt to the winner of the Jon Moxley-Mr Brodie Lee clash.

“I think AEW should have Mike [Tyson] and myself do a tag team match against two of their champions,” said Belfort.

The idea of Belfort and Tyson teaming up is not beyond the realms of possibility, especially as ONE Championship, who Belfort is signed to, and AEW both air on TNT.

‘The Phenom’ and ‘Iron’ Mike exchanged greetings during the event, and later the two combat sports veterans hit the gym for a training session. Tyson, like Belfort, is also on the comeback trail, and Belfort was quick to offer praise to the former heavyweight champ.

“I think that (to fight again) is a decision Mike [Tyson] has made for himself. It takes a lot of courage to step back in the ring, especially at that age. I admire him for his bravery and wish him the best of luck,” Belfort commented.

“He needs to train smart because what used to work for him before might not work for him now. This is new ground he’s discovering for himself, and it’s a wonderful journey.”

At the moment, neither fighter has a scheduled return date, but if Belfort has his way, the two legends will soon not only be supporting each other but competing alongside one another.