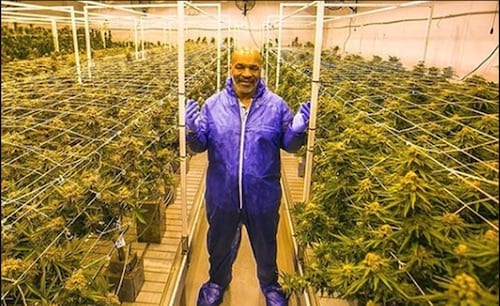 Mike Tyson, the famous boxing legend, has revealed that he smokes weed worth K or £33K every month. At the age of 53, this legendary boxer has exposed the high costs of running a weed farm. Tyson is a former world heavyweight champion with a ranch in South California. Here, the recreational use of marijuana is legal.

California legalized the medical use of California in 1996, with the recreational use of cannabis being legalized in 2016. Since then, several people have ventured into the cannabis production industry. Nevertheless, the law requires individuals to be at least 21 years old to purchase, use, or have recreational marijuana. Thus, you must be of legal age to use cannabis, whether through smoking, eating, or vaping cannabis products in California.

Tyson runs a 420-acre ranch where he grows cannabis in California. The former champion produces different cannabis products. His raw cannabis is used to make some of the best cbd oil from vapingdaily in the market today. He has also revealed that his ranch will soon be a weed-themed resort that will be free for members of the public to visit. He runs the ranch with Eben Britton, his business partner.

During a podcast episode named ‘HotBoxing’ with Mike Tyson, the former champion disclosed the amount of this psychoactive drug they consume with his business partner. Eben Britton is a former NFL player and a marijuana advocate. The duo confessed that they smoke weed worth $40,000 a month.

The duo disclosed that they smoke up to 10 tons of cannabis at their ranch every month. Britton went ahead to mention that they have plans to turn their 40-acre farm into a resort. Jim Jones, a guest rapper, was surprised by the revelation of the amount of cannabis that Tyson smokes every month. He noted that that was a lot of cannabis. It translated to nonstop smoking.

Tyson went ahead to talk to listeners about his plan to open a cannabis-themed resort. He hopes that the resort will eventually have him roll in money. It’s no secret that his latest career pivot could be the most lucrative.

The global demand for the best full-spectrum CBD oil and related products is rising. The move to legalize the production and sale of recreational marijuana is considered a significant milestone in the process of mainstreaming it. Hundreds of people lined up to purchase the herb following its legalization in California.

Even before the opening hours, people lined outside the stores that were licensed to sell weed. Store owners also stocked up because they expected a surge in demand for recreational cannabis. And, the need for cannabis has continued to grow not just in California but in other states and countries too.

He also noted that the production facility would be more than a luxury, cannabis-themed resort. That’s because it will soon have an edible factory, ‘glamping’ campgrounds, and an amphitheater.

It’s no secret that Tyson is living a high life after his retirement from boxing. His venture has proven that grass can sometimes be greener on the other side. The former heavyweight champion says that he will call his holiday resort the Lollapalooza of Cannabis.

This ring legend launched a company called Tyson Holistic Holdings in 2016. He also owns the Tyson Cultivation School that teaches farmers how to grow different cannabis strains and even develop them.

But, the journey has not always been a walk in the park. In 2000, Tyson was fined after testing positive for cannabis. The former ring champion said in his memoir that he used to get high before most major fights. Tyson also added that he could use marijuana after his sentence on the grounds of possessing cocaine in 2007.

Nevertheless, the former champion has come out clearly to express his support for the cannabis industry. He adds that his ranch focuses on delivering the best cannabis with every package. He further adds that the ranch is committed to the plant and its exotic genetics. As such, they ensure that their cannabis products are delivered clean and with premium quality.

California was among the first six states to allow the production and sale of recreational marijuana. What’s more, California is the most populous state in the U.S. These are some of the factors that make California one of the best places to start a business of producing and selling cannabis.

With cannabis being legal in one of the most populous states, the industry size is bound to increase dramatically. In California, the industry is likely to hit the $7 billion mark in a few years. It will be more than $6.6 billion of the total market value for legal cannabis in 2016.

Once the herb has been legalized in the neighboring states, more people will be interested in trying it. What’s more, research has shown that CBD, an extract from cannabis, holds numerous health benefits. These include the potential to help with anxiety and sleep problems. Some researchers have also speculated that CBD has shown the potential to help cancer patients, especially after undergoing chemotherapy treatments.

These are some of the things that are likely to increase the demand for cannabis and related products like CBD. Mike Tyson seems to have known this and decided to take advantage of the medicinal and recreational marijuana laws to venture into a lucrative business. Thus, his ranch might be among the leading sources of the best CBD oil and other products in the future.

The revelation that Mike Tyson smokes cannabis worth $40K every month may have come as a surprise for some people. However, the former heavyweight champion has made a calculated move to invest in this lucrative business. Tyson may be retired from active boxing. However, he is making a living from legal production and sale of cannabis. And with plans to set up a resort and an edible factory, Tyson Ranch could be the place where people will get the best CBD oil for pain in the future. Nevertheless, weed worth $40K is too much for some people to burn every month.