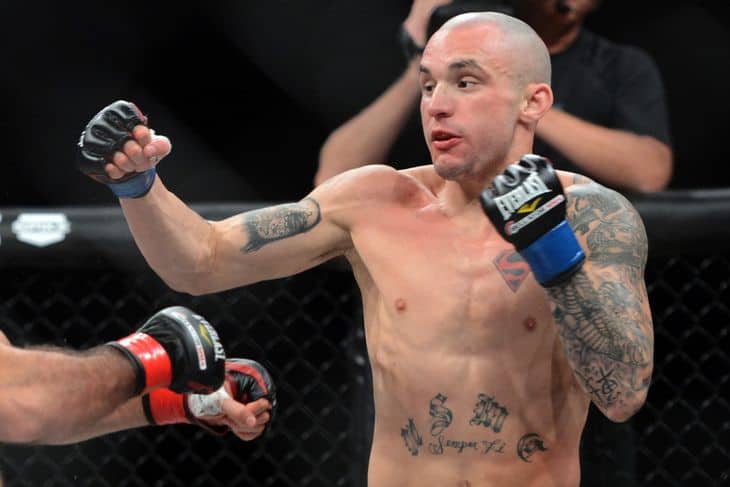 It looks as if the performance-enhancing-drug (PED) problem has hit Bellator MMA, as it has been confirmed by MMAFighting.com that bantamweight Mike Richman has tested positive for anabolic steroids following his Bellator 137 (May 15, 2015) loss to Eduardo Dantas. Richman also came in over weight for the bout.

California State Athletic Commission executive officer Andy Foster has confirmed that Richman will pay the price, as the 29-year-old has been dealt a crucial two-year suspension as well as a $2,500 fine.

Prior to Bellator 137, the former U.S Marine Richman was coming off of back-to-back knockout wins over Ed West and Nam Phan at Bellator 126, and Bellator 131 respectively.

It was also made clear that another competitor competing on the card, Fernando Gonzales, tested positive for marijuana and is facing a $1,500 fine.

Bellator released the following statement on the situation:

“Andy Foster of the California State Athletic Commission has notified us of two positive tests following Bellator 137, Mike Richman for PEDs and Fernando Gonzalez for Marijuana,” Bellator said in a statement. “We’ve been informed that these fighters will be subject to suspensions and fines. We here at Bellator stand behind the commission 100 percent in this process and remain committed to keeping MMA clean of substance abuse.”

While the use of anabolic steroids is completely unacceptable and dangerous especially in a sport like mixed martial arts, Richman may deserve some credit for his sincere response to the news. While some big name stars who have been popped for PEDs made excuses, Richman takes full responsibility for the mistake he made, and apologized to everyone he could think of via his Facebook page:

“In regards to my positive test results for an Anabolic Steroid. I want to say that I lost the integrity in myself and the integrity of this sport. I will not sit here and deny that I took it or act like I didn’t know what I was taking or blame it on someone else. I am a cheat, plan and simple and there is no excuse or reason that is valid enough to dispute the reasons why I cheated the sport and myself by using it. I want to apologize to Bellator MMA for my actions. I want to apologize again to my hard working Teammates who are not cutting corners and busting their asses off everyday in the gym to better themselves. I want to apologize to My head MMA coach Greg Nelson for making him and his gym the Academy look bad. He had no knowledge of me using at all. I want to make the same apology to my S&C coach Matt Miller of Horsepower strength and conditioning, he also had no knowledge of my use of this Anabolic Steroid. I apologize to all my sponsors that support me, my family that loves me, and my friends and fans that cheer for me. I deserve every bit of backlash and hate I’m going to receive from the media and the fans of this great sport. I take full responsibility in my actions and the decisions I made. I also deserve the punishment the CA state athletic commission brought down upon me.”