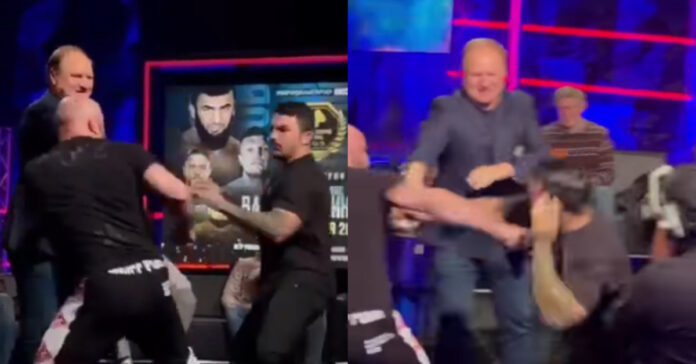 Mike Perry continued to do Mike Perry things this week, but this time, he took his patented ‘Platinum Heat’ to Moscow.

The former UFC welterweight turned BKFC brawler recently made a trip to Russia to corner his friend and training partner Alex Nicholson as he prepares for a bout at Ren TV Fight Club this week. During a press conference ‘Platinum’ got into a scuffle with Russian middleweight standout Magomed Ismailov, a fighter with more than 10 years of combat sports experience and 17 wins to his credit per Tapology.

Following the incident, Mike Perry gave some insight on the situation while speaking to his Instagram followers.

“I almost got jumped in there but luckily people broke it up,” Perry said. “In Russia, if you call someone a ‘mother f*cker,’ they think you talking about someone’s mom, so then the whole team comin’ to get you. But in America when you say ‘mother f*cker,’ it’s like normal words, mother f*cker. It’s normal, man, I’m not talking about your mama. Chill bro, one on one.”

It’s not the first time Mike Perry has found himself at the center of a brawl. In his first appearance with Bare Knuckle Fighting Championship, he got into an altercation with former The Ultimate Fighter cast member Julian Lane who was sitting in the crowd. The two later settled things inside the squared circle at the promotion’s second annual Knucklemania event, but not before Perry appeared at the pre-fight press conference with a baseball bat in hand.

Perry’s last appearance inside the squared circle was at BKFC 27 in August. He defeated Bellator MMA star Michael ‘Venom’ Page in an entertaining six-round war. Since then, ‘Platinum’ has been pushing for a boxing match with YouTuber turned professional boxer Jake Paul or a bare-knuckle brawl with the hottest free agent on the market, Nate Diaz.