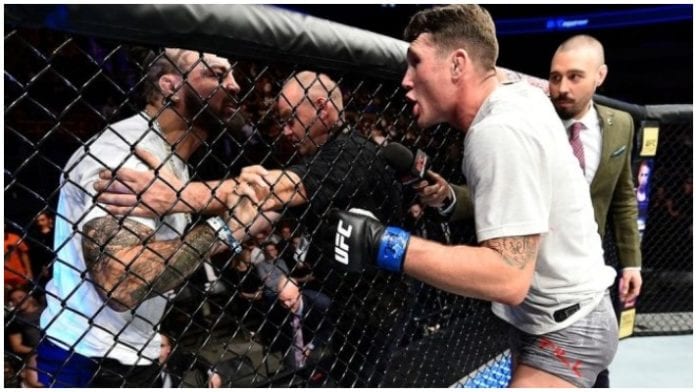 Fan favourite Mike Perry has gone after middleweight contender Darren Till in a foul-mouthed rant. ‘Platinum’ is clearly unhappy with some comments the former title challenger has made about his girlfriend.

Till took to social media earlier this week to crudely call out his long-time frenemy Perry. In a foul-mouthed tweet of his own the Scouser suggested the pair settle their differences on ‘Fight Island’ before taking some uncalled for shots at Perry’s girlfriend, he wrote.

“Why don’t me & this fat c*nt just fight on fight island to settle our differences? He’s only a fat mess & when I smash his jaw clean off I’m gonna raw dog his bird, Fuchken MuPPet!!”

Speaking to MMA Junkie, Perry reacted angrily to the comments made by Till and seemed to become unhinged when talking about a potential fight between the two, he said.

Perry went on the recount his infamous sparring session with Till. The welterweight knockout artist claims he got the better of the Englishman and would be willing to do the same again in a middleweight match-up later this summer, he said.

“I busted his eye open when we sparred that one time. He has some heavy hips, I’ll tell him that. Because he’s a fat piece of (expletive) so his hips were heavy. His feet were glued to the (expletive) floor, but I busted his eye up, and I (expletive) him about 20 times with combinations, little pity pats to the face. He was easy to hit, it’s like he was a statute sitting still, and I was dancing around him then he tried to shoot on me, and I kneed him in the (expletive) eye, and he was bleeding in that little picture we took. You ask him about sparring with Mike Perry.”

Do you want to see Mike Perry and Darren Till fight?