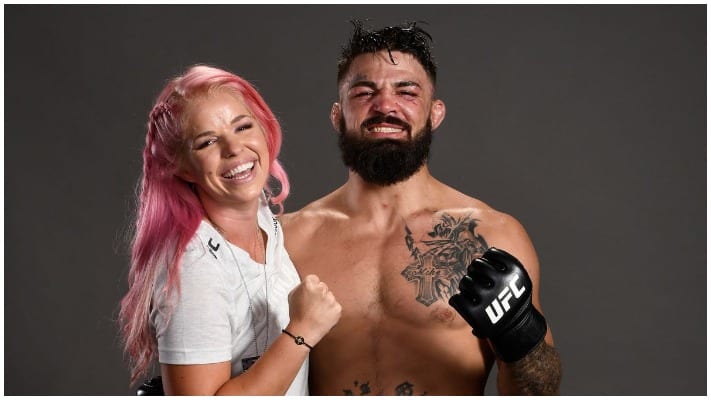 Mike Perry has attempted to get ahead of the news cycle by releasing a statement denying any physical abuse of his ex-wife, Danielle Nickerson.

According to Perry, an unknown media outlet is set to run a story that details his alleged abuse of Nickerson. ‘Platinum’ claimed he never “put my hands on” Nickerson but did admit to having an issue with alcohol that led to him saying some things he is not proud of during their brief marriage.

“It’s come to my attention that a media organization will be running a story in reference to a past issue with my ex wife. I would like to address this here now. First and foremost I did not put my hands on my ex at any point in our short term marriage. Secondly, I have already admitted to having an issue with alcohol, and I have been a part of an intensive rehab program that was able to help address not only that but also helped me with anger management. After the completion of the course, I realized that I had said some things in the past that do not put me and what I stand for in the best of light and for that I apologize. I am now in a loving relationship where I am looking forward and excited to welcoming my first born. I’m hopeful, my ex can move on and find peace as I have.” (Transcribed by BJPENN.com)

Perry has had a mixed year. The 170lb knockout artist is set to welcome his first child with Latory Gonzalez and has also picked up a big win over Mickey Gall inside the Octagon. However, he found himself on the wrong side of the law earlier this year. Perry was accused of assaulting three people at a Texas restaurant. Shortly after it was reported his ex-wife had filed for a restraining order – the application was denied.  ‘Platinum’ is set to square off against Robbie Lawler at UFC 255 on November 21.

Do you believe Mike Perry?