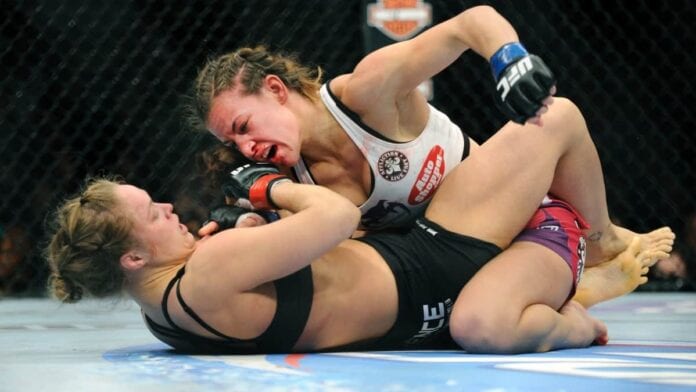 We are now just about a week removed from UFC on FOX 16, which went down last Saturday (July 25, 2015) from Chicago, Illinois. One of the biggest stories of the evening was top-ranked women’s bantamweight Miesha “Cup Cake” Tate earning her fourth-straight win, and as a result earning her third crack at bantamweight queen Ronda Rousey.

However, her win wasn’t the most interesting thing regarding Tate that evening, as she has revealed to MMAJunkie that she actually wore two sports bras during her fight due to an incident that happened earlier on the card.

Earlier on in the event, fellow bantamweight Elizabeth Phillips scored a victory over Jessamyn Duke, but things went south when Phillips’ breast was briefly, and accidently seen during the fight. Social media blew up, and Tate didn’t want to take any chances:

“I doubled-up after I saw that,” Tate said during a recent in-studio MMAjunkie Radio appearance. “I didn’t see it, but I heard about it. I was like, ‘I’m putting on another sports bra, and I don’t care.’ It was a Reebok (sports bra), but it wasn’t part of the uniform.

“I was like, ‘I don’t care. I’m putting it on. You can’t make me go out there after seeing that fight – with just one (sports bra) on.’ I doubled up.”

The sports bras, which of course are part of the new, and highly controversial UFC-Reebok uniforms, may need some improvements according to “Cup Cake”:

“There’s definitely some input (I’ll share),” she said. “We need a thicker band around the base (of the bra), to kind of make sure it stays down. It’s just kind of (too) soft. … You don’t want to have to worry about that kind of stuff in the middle of a fight.”

In closing, Tate stated that she feels terrible for Phillips, and asked everyone who had the picture or video up on social media to take it down:

“My heart goes out to Elizabeth,” Tate said. “I feel so bad for her. I mean, she was just completely exposed. … It was all over the Internet. There are pictures of it all over.

“I suggest to anyone who’s posted that picture and put it up, either take it down or blur it out. Have some humanity. The poor girl, she didn’t choose (to do) that, to fight in that. It’s not her fault. Have some decency and respect the poor girl.”