LowKickMMA.com
Home MMA News Miesha: Cyborg’s ‘A Very Big Girl,’ But I Have The Heart &... 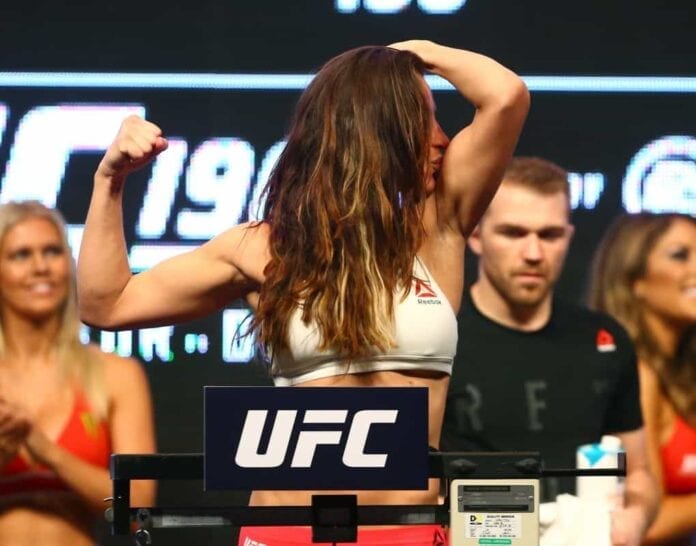 Just over two weeks ahead of her first-ever UFC title defense against Amanda Nunes on the main card of July 9’s blockbuster UFC 200 event from Las Vegas, UFC women’s bantamweight champion Miesha Tate knows there are some absolutely huge fights awaiting her if she can get past “The Lioness.”

She can’t look past the fast-starting (and oftentimes, fading) challenger, but it’d be impossible to not eye say, a trilogy bout against former champ Ronda Rousey or a huge superfight of sorts versus Invicta FC featherweight champ Cristiane ‘Cyborg’ Justino, who just made her UFC debut in May. Speaking during a media luncheon in Hollywood, California, today (via MMA Fighting), ‘Cupcake’ expressed her obvious excitement of fighting the dominant ‘Cyborg’:

“I think it would be really cool to fight Cyborg, honestly,” Tate said. “Like to really see what it’s like to be in there with someone with her power. … I’ll be the first to admit, physically I think I would be at a disadvantage, but I think that I can be the one to prove that I have the heart, the durability, the determination and the will power — and technique — to overcome that kind of challenge. And that intrigues me. That would be very rewarding to me.”

Tate had previously teased a move up to 140 pounds in order to fight ‘Cyborg,’ and Justino actually made that weight for his first UFC bout, a UFC 198 win over Leslie Smith. But ‘Cupcake’ finally received a much-deserved title shot against then-champion Holly Holm at March’s UFC 196, and capitalized by securing an emphatic come-from-behind submission to rip the belt from ‘The Preacher’s Daughter.’

That obviously complicated things, so Tate revealed that while her opinion on the matter hasn’t necessarily changed, she’s not sure if she can galavant between weight classes as featherweight champ Conor McGregor has seemingly been doing:

“It hasn’t changed, but the thing is, is I don’t know if I can not fight for the belt while I’m the champion,” Tate said. “I don’t know how that works. I’m not Conor McGregor. He has like his own set of rules. I’m not really sure. I wouldn’t be opposed to it. But I think it would be better if we did make it a title fight. At some point if that comes down and it’s allowed, like of course.”

Weight always seems to be the issue with any top female fighter facing ‘Cyborg,’ whose long-rumored feud with Rousey turned out to be only rumors when ‘Rowdy’ said she’d have to make bantamweight and Justino ultimately said it was too much. But she did hit 139 on the scales prior to her win over Smith in her native Curitiba, Brazil, so Tate believes that while ‘Cyborg’ is obviously a huge competitor, she can make the bantamweight limit of 135 pounds – even if it is tough – nonetheless:

“I think she can make 135 pounds, but yeah, she’s a very big girl,” Tate said. “She’s naturally big and I’m sure that it would be really a difficult cut for her. She’d have to lose muscle. She wouldn’t just be able to lose the water weight. She’d have to come down.”

A Tate-Cyborg tilt for the belt would be a massive spectacle, yet the UFC may want to book ‘Cupcake’ against Rousey, Holm, or even the winner of UFC 200’s Julianna Pena vs. Cat Zingano match-up first, and with ‘Cyborg’s’ UFC future uncertain as of now, the belt could be around another woman’s waist when the chance to book it even legitimately arose.

Then again, it could just be the biggest fight to make in women’s MMA for later this year if Rousey ends up not returning until next year. After nearly retiring with her position in the division up in the air only 18 months ago, the future is all of the sudden bright for Tate.

All she has to do is keep winning.