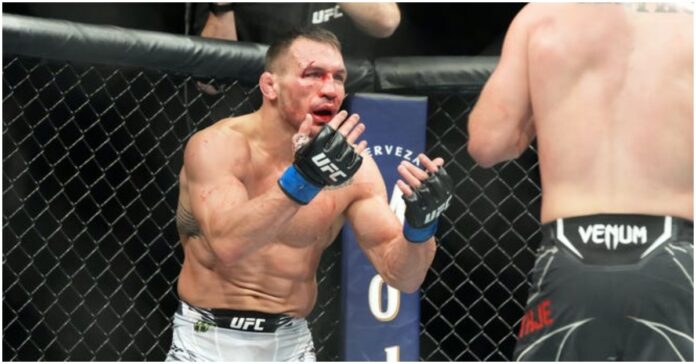 Michael Chandler was forced to apologize to his wife following his three-round Fight of the Year contender with Justin Gaethje at UFC 268.

The former Bellator champion went blow-for-blow with Gaethje for 15 minutes before ultimately falling a unanimous decision defeat on November 6 at MSG.

Despite gaining a legion of new fans for his gritty performance, Chandler disappointed the person who is almost certainly his biggest fan – his wife.

During a recent appearance on The MMA Hour, Chandler explained that he told his wife his game plan was to wrestle against Gaethje and that he felt the need to apologize to her post-fight for not sticking to his word.

“I had to apologize to my wife because I told her. I told her what the game plan was,” Chandler said. “The game plan was; ‘cause I think I beat Justin Gaethje in a wrestling match 9 times out of 10. And that’s not any disrespect to him. I just think my wrestling is better than his. I could’ve used my wrestling more. I could’ve used cage control a little bit more. I could’ve grabbed hands, under-hooked, grabbed the head. I could’ve made it a little bit more of a close-quarters type of fight, instead of going out there throwing big shots. But once the fight started, I reverted back to who I am as a person. I reverted to what courses through my DNA, which is just fighting, man. And I loved it.” (Transcribed by Sportskeeda)

The 35-year-old is now riding a two-fight losing streak after previously falling short in his bid to become UFC champion when he fought Charles Oliveira earlier this year. Chandler hopes to get a couple of his wins under his belt before rematching Gaethje for UFC gold in the not-so-distant future.

Do you think Michael Chandler should’ve wrestled more at UFC 268?