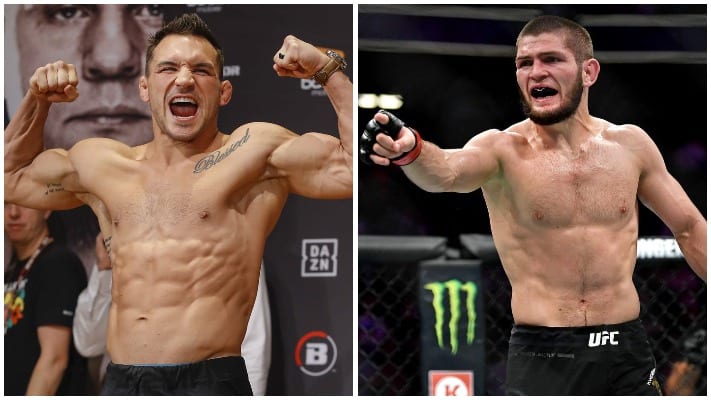 UFC 254 back-up fighter Michael Chandler believes he is a superior wrestler to Khabib Nurmagomedov and says he will be able to take down the Russian if he gets the call to fight on October 24.

The former Bellator lightweight champion ended his time in free agency by signing with the UFC last week. Dana White immediately announced Chandler would be the man to step in to the UFC 254 main event should Nurmagomedov or Justin Gaethje fall out for any reason.

Speaking to his fans on social media during an Instagram Live Q&A Chandler expressed his view that Nurmagomedov would not be able to take him down and that it’s the champion who should be concerned about hitting the mat, he said.

“I think I’m the better wrestler than he is. That’s not to disrespect his wrestling. I think he has shown to be the most dominant wrestler in mixed martial arts, the most dominant wrestler in the world. What he does to guys, he comes forward with reckless abandon, pushes you against the cage, picks you up, put you down and puts you in the Dagestani handcuff. Full mount, side guard, crucifix, half guard or in your guard – the guy is dangerous everywhere. … I will say, he’s never, to my knowledge, fought a Division-I, high-level Division 1 wrestler. I don’t think he’s fought anybody who is a Division-I wrestling All-American. There’s just a different breed out there. There’s a different breed between a high school wrestler who got into mixed martial arts and stopped doing wrestling many years ago and a guy like myself, who was a Division-I wrestling All-American.

“The game plan against Khabib – he’s not going to take me down I don’t think. If he takes me down, he’s not going to hold me down. I’m going to be able to take him down unlike everybody else who has been up to fight him. As we saw in the Khabib versus Al Iaquinta fight, when he can’t take you down he starts to resort to a little bit of sporadicism, a little bit of – he gets off his game. A little bit of seeds of doubt get planted in his head because he knows he doesn’t have great striking, he knows his ability to win the fight is predicated on him being able to get in your face, to put you up against the cage and pick you up and hold you down. That’s the game plan: Don’t get taken down. But that’s everybody’s game plan. So I’m going to sit here and say I won’t get taken down. You guys won’t be able to see it until possibly Oct. 24, or somewhere down the line. Because I will be fighting Khabib Nurmagomedov for the title in the near future. Get ready for it.” (Transcribed by MMA Junkie)

Do you think Michael Chandler will be able to take down Khabib Nurmagomedov?