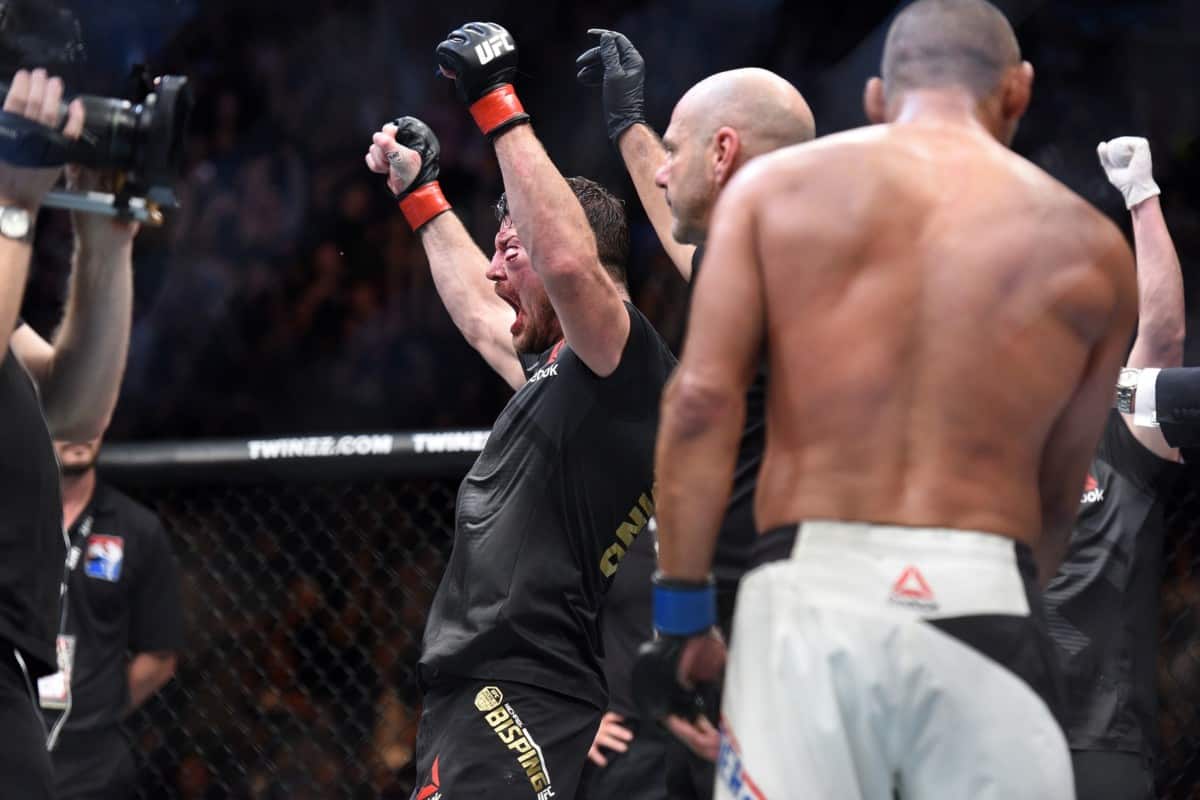 Redemption or a storybook ending?

That’s the question mixed martial arts (MMA) fans had leading up to the main event middleweight title bout of UFC 204 in Manchester Arena. Title holder Michael Bisping (30-7) looked to exact revenge and successfully defend his belt when he fought Dan Henderson (32-15) for a second time.

“Hendo” was looking to end his career by winning an Ultimate Fighting Championship (UFC) title for the first time. Despite coming extremely close, he came up short in his bid.

Bisping went for a high kick early and it was blocked. Henderson landed a leg kick. The two traded jabs with Henderson’s having more impact. “Hendo” went for a huge overhand right, but it missed. A leg kick found the mark for “The Count.” A cut formed on the forehead of Bisping. Henderson was an easy target for the jabs of Bisping. A huge right hand sent Bisping to the canvas. He rained down heavy shots, but the champion got back up and survived the round.

Bisping went back to his jab in round two and landed a leg kick. “The Count” kept sticking to his strategy. Bisping moved forward and was keeping the challenger at bay. A partially blocked head kick had “Hendo” off balanced. A right hand popped the champion, but he ate it. A hard right hand sent “Hendo” back a bit. He held onto his groin to imply a low blow, but time was not called and Bisping moved forward. A right hand counter dropped Bisping yet again. Henderson remained in top control until the horn sounded.

The third frame began and Bisping landed a jab followed by a right hand. The champion connected with another right hand. A jab and a leg kick landed for the champion. The champion’s output continued to be far mare than his opponent, who was waiting to unload his right hand. Unlike the first two rounds, “Hendo” was not able to drop the champion.

The championship rounds were underway. “The Count” went high with a kick. Bisping was the more active fighter as he had been all night. Henderson landed a body kick and a jab. The champion kicked his opponent low again and this time, the fight was halted. The fight resumed and Henderson blocked a high kick. A combination that ended in a body kick found the target for “Hendo.” A knee connected for the challenger and the fourth frame ended shortly after.

A spinning wheel kick attempt from Bisping missed with a little over 20 seconds into the final round. Henderson was aggressive and moved forward. Henderson’s corner urged him to finish the fight with over three minutes left. “Hendo” landed a knee to the body. Bisping answered with a combination. The challenger missed an uppercut, but landed a leg kick. A right hand clipped Bisping, but he took it. Henderson took his opponent down, but the champion scrambled out. The challenger’s takedown attempt was thwarted. A flying knee was throw by Bisping and Henderson went for his own forward roll kick as the final horn sounded.

All three judges saw Bisping as the winner and as a result he retained his championship.