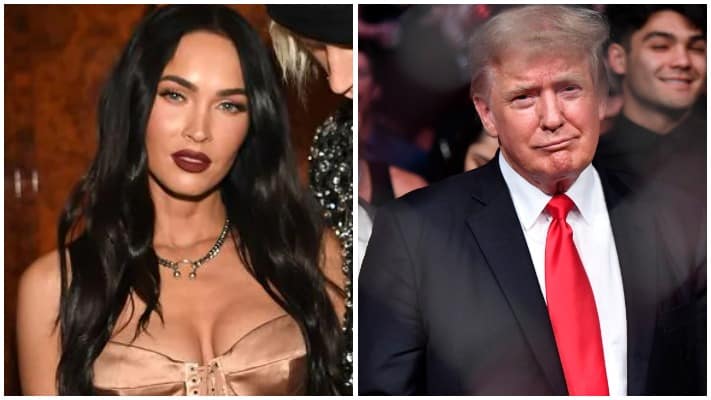 Megan Fox was one of the many big-name celebrities who came out to watch Dustin Poirier vs. Conor McGregor III.

The Transformers star appeared on the UFC 264 broadcast alongside her boyfriend, Machine Gun Kelly, and a whole host of A-listers including Justin Bieber, Kourtney Kardashian, and Dave Chapelle.

Donald Trump was perhaps the most high-profile name of all in attendance at UFC 264. Fox spoke about sitting alongside the former president during a recent appearance on Jimmy Kimmel Live!.

“I was in a row with [Justin] Bieber, and Trump was also in my row,” Fox said. “He had, like, thirty secret service with him. He was a legend. That arena was very supportive of Trump when he came in.”

The experience didn’t come without some level of concern for Fox who claims she was concerned for her safety.

“If someone is a target, then I’m like, I could be harmed because I’m adjacent to where he is,” Fox said. “I was worried about my own safety, that’s all I was caring about.”

Since referring to Trump as a “legend” Fox has received backlash for her perceived support for the 45th American president and the Republican party. This backlash prompted the actress to take to social media to clarify her comments.

“I do not align myself with any political party or individual politicians,” Fox wrote on her Instagram story. “I never said Donald Trump is a legend. I said he was a legend … in that arena (key part of the sentence).”

“The arena was filled with UFC fight fans. Many of them clearly Republican based off the insane crowd reaction he received walking into the T-Mobile venue,” Fox continued. That was an observable fact. Not my opinion.”

“Really loving this uneducated, mid-evil, pitchfork carrying, burn a witch at the stake mentality though,” she wrote sarcastically. “The world needs more of that.” (Transcribed by NME)

Do you think Megan Fox has been unfairly treated after making comments about her UFC 264 experience?