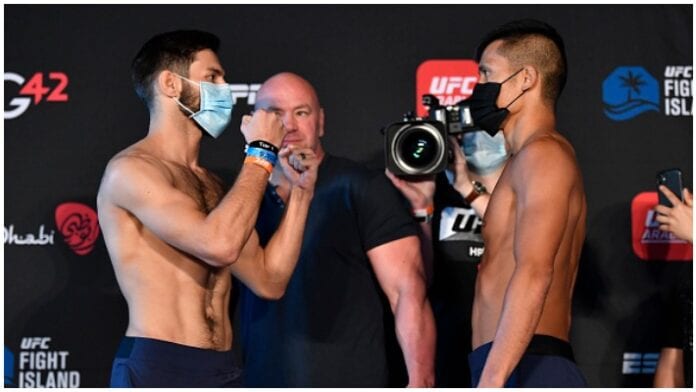 Round 1: Matt Schnell lands a low kick early but it’s caught by Tyson Nam who puts his opponent on his backside. Up pops Schnell and they are pack at striking range. Both guys are taking their time. Nam lands a nice right hand, perhaps the best shot of the fight so far. It’s a case of volume vs. power at this point. Schnell is using combos to dictate this round but Nam remains a danger due to his one-punch power. Nam lands a couple of big body shots in a quick session. He lands a big right hand but Schnell returns with several hard punches of his own – a great exchange. Not much else lands before round one comes to a close.

Round 2: Schnell looks great at the start of round two. Lot’s of fast punches that seem to be the difference right now. Nam lands a huge right hand that partially knocks the mouthpiece of his opponent out. Schnell looks distracted but survives. He goes back to work but soon after he eats another big shot. Nam is starting to catch up with him in round two. Schnell is getting back behind his jab. He lands a nice combo on the inside but Nam is content to eat it to try get off. This is a high stakes game of cat and mouse. As the round progresses Schnell is doing a better job of getting of and avoiding counters. Both men throw to the buzzer in this lively flyweight match-up.

Round 3: A low leg kick from Schenll to start the final round. He continues to stay on his bike while staying busy with his output. Nam remains a danger though and is getting off with his strikes. Schnell pops out his jab but Nam is trying to time it and coming over with dangerous right-hand shots. Nam continues to push forward but he’s eating shots on his way in. Schnell is doing well on his back foot to stay offensive. It’s becoming a similar story at this point. Schnell is popping his opponent with the Nam who is starting to miss wildly towards the end of this fight. Nam cracks him with 10 seconds left on the clock but is unable to follow up before the horn sounds to end this fight.