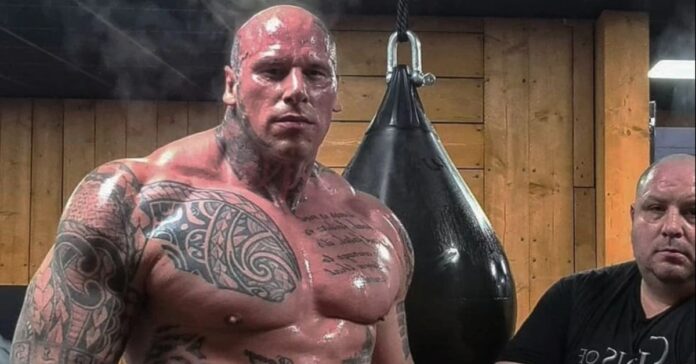 British bodybuilder, Martyn Ford has confirmed that he plans to pursue a run in professional mixed martial arts under the banner of European promotion, KSW – after a scheduled boxing match against fellow bodybuilder, Sajad Gharibi, otherwise known as the ‘Iranian Hulk’ was shelved recently.

Ford, a native of Minworth, who turns 40 years of age later this month, was scheduled to fight Gharibi in a boxing matchup, with the two engaging in a face-off prior to the bout, which included in a pre-fight scuffle – before the planned pairing was ultimately cancelled.

Prior to the outbreak of the COVID-19 pandemic, Ford intended to embark on a professional mixed martial arts run with KSW – and is still hoping to land a fight under the Polish-based banner, later this year, in fact.

“One hundred per cent I am planning on getting involved in MMA,” Martyn Ford told Mirror Fighting during a recent interview. “I am already speaking to KSW. This is something that was set pre-COVID. I have still been doing pieces of Jiu-Jitsu and stuff. They (KSW) are looking at coming to London in October, and that is an event I would love to get involved with.”

As far as potential opponents are concerned, Ford insisted that any potential fight would have to come against the right calibre of fighter for him.

“It just needs to be the right person and right time, my feelers have been put out there to try and get this set up as soon as possible,” Martyn Ford said. “I understand the frustration from people about not yet seeing me fight. I am still training, (the) only thing I am not doing is active sparring. I have switched back into its resistance and explosive power.”

“If something does happen which I am hoping I can sign up too soon, I have been training and dedicating so much time and effort to it,” Martyn Ford said. “I need to do it for my own mental state, to be honest, anyone will understand the frustration I am going through at the moment.”