LowKickMMA.com
Home MMA News Martin Nguyen:’Whoever Wants To Step Up To The Plate, I Am More... 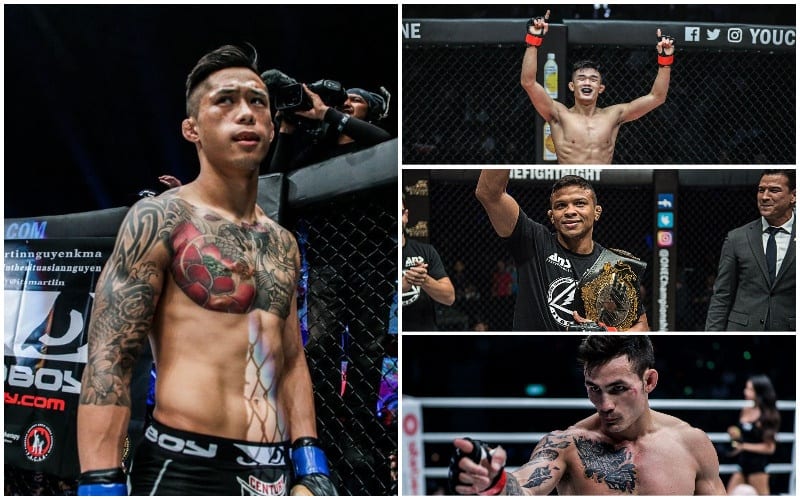 ONE Featherweight Champion Martin Nguyen has confirmed he is open to campaigning in other divisions and competing in super-fights, provided he first cleans out the featherweight division.

Speaking to ONE’s Michael Schiavello, the 31-year-old Vietnamese-Australian discussed how he sees his future unfolding.

“Before this coronavirus outbreak happened, I was already contracted to take on Thanh Le. So, for now, I aim to fulfill that contract. I will not fight anyone else, but Thanh Le next. When that date comes, he is going to get the best version of Martin Nguyen,” Nguyen said.

Le has earned a reputation as one of the promotion’s top featherweight strikers after racking up three KO wins in three promotional appearances. However, Nguyen—a KO artist in his own right—is backing himself to put an end to Le’s streak.

” I’m just going to walk in there I am going to do my thing, and all I gotta do is touch him, and that’s all I gotta know,” Nguyen exclaimed.

“When that fight is done and dusted, whoever wants to step up to the plate, I am more than ready.”

If Nguyen can get past Le, he will turn his attentions to BJJ maestro Garry Tonon before moving on to new challenges. Nguyen is no stranger to fighting out of featherweight: he had a brief reign as the ONE lightweight champion before injury forced him to vacate the title and also competed at bantamweight, albeit less successfully. It appears it is the lighter division that Nguyen seems to have his heart set on returning to.

“I have two more fights in the featherweight division, taking out the two guys who I haven’t beaten in the top five, and I’ll consider moving divisions or taking super fights from there.

” I have been in talks with Chatri [Sityodtong] about taking super fights. There have been some big names which have come up. I’m very interested, but I also want to redeem myself at that bantamweight division.”

Nguyen has fought twice for the bantamweight strap, coming up short on both occasions. His first crack at the title saw him lose via split decision to Brazil’s Bibiano Fernandes in May of 2018. Two months later, after the Brazilian injured himself, Nguyen took on Kevin Belingon in an interim title fight, again losing via decision.

Fernandes is the division’s current king, and a rematch between him and Nguyen would make for entertaining viewing. There is also the question of a trilogy bout with ONE Lightweight Champion Christian Lee. Nguyen and Lee have faced off twice, both at times at featherweight, with Nguyen getting the better of Lee in both fights.

The last time they fought was in 2018 at ONE: Unstoppable Dreams. The bout failed to live up to the pre-fight hype and was more of a chess match than the fireworks display people had expected. Since then, Lee’s conquered the lightweight division, defeating Shinya Aoki and Saygid Guseyn Arslanaliev along the way. At the same time, Nguyen has teamed up with Henri Hooft at Sanford MMA, which has helped him develop even more as an athlete.

A third meeting between the pair could be one of the biggest fights the ONE matchmakers have up their sleeves. It is a fight that Nguyen is not ruling out either.

“Both of us being new evolved fighters will be taking different approaches to this fight compared to our last fight, so I am sure he will come out much more aggressive as will I,” Nguyen said, discussing Lee.

“Both have nothing else to lose, its more about putting on a show at the end of the day. I know we said this at the last bout, but it didn’t play it that way, but because we have been there done that, we can put that aside and run it again. “

Before any of this talk can become a reality, Nguyen will first need to get past a very dangerous Le, and if he can, the sky’s the limit.

Who would you like to see Nguyen face next?