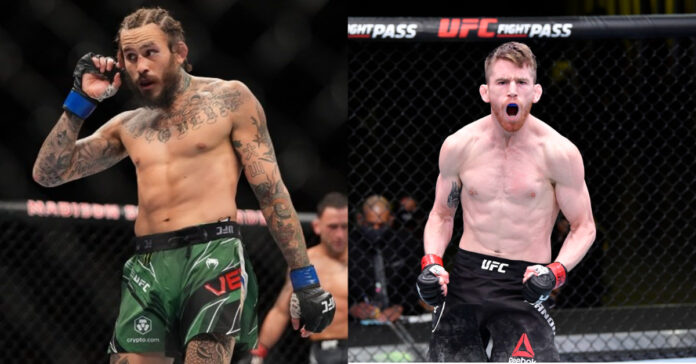 Last night at UFC Vegas 60, the UFC pitted two of the most exciting strikers in the 135lb division together as Cory Sandhagen and Song Yadong squared off to do battle over five rounds.

Sandhagen entered the bout off the back of two losses, having come up short against former champions Petr Yan and T.J. Dillashaw, and was looking to put a show on.

As for Yadong, the 24-year-old has long been considered one of the best rising prospects in MMA, being tipped as the future of the 135lb division.

In the second round, Sandhagen would land a slashing elbow which would open a horrific cut across Yadong’s eyebrow. The cutman would do his best to keep Yadong in the fight, but following the fourth round, the doctor decided he had seen enough and would call a halt to proceedings.

Following the bout Sandhagen made it very clear who he wanted next, calling out Marlon Vera and Merab Dvalishvili

Sandhagen said. “I think as a martial artist, I try not to have many opinions about anything. I live in a way where I just more or less try to go with the flow and that life give me opportunities, and I take them. Chito and Merab are the obvious names. Both of them pose very different challenges, two completely opposite fighters almost. I don’t really care man. Give me one of them for Christmas.”

Vera, who was in the building for the event, wouldn’t take long to respond, not shying away from the bout.

Would you like to see Marlon Vera Vs Cory Sandhagen?