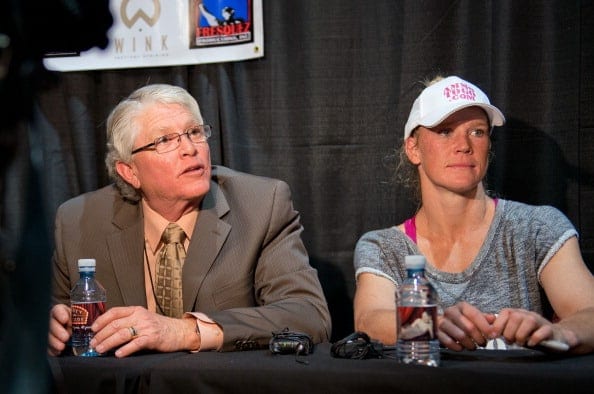 Holly “The Preacher’s Daughter” Holm pulled off the unthinkable, and one of the biggest upsets in mixed martial arts (MMA) history when she shockingly knocked out former bantamweight champion Ronda Rousey in the main event of last night’s (November 14, 2015) UFC 193.

Holm was a massive underdog, but she seemed calm and confident throughout fight week, and of course her team felt as if she could get the job done.

Of her team, her manager, Lenny Fresquez, may have been amongst the happiest, saying that he’s always believed in Holm, and believed that she would reach this level of greatness:

“Just basking the glory, just basking in what I knew would come true,” Fresquez told MMAFighting asked about his current mood. “I’ve always believed in Holly and any obstacle we’ve put in front of her she’s always conquered. When she’s stumbled, she didn’t want to do anything else but get up and fight the girl that had beat her. She’s just an amazing person. I’ve worked with a lot of fighters and she’s an exceptional fighter. There’s not many fighters like her with heart, grit, loyalty, dedication… I mean, she’s just the kind of athlete that you can’t say enough good things about. Role model… I mean, ‘Preacher’s Daughter’ fits her well.”

Interestingly enough, Fresquez was so confident in “The Preacher’s Daughter” that he actually bet on her to win in Las Vegas, and needless to say, came away a much wealthier man:

“Of course I did, of course I did,” Fresquez responded when asked if he bet money on Holm. “We made a lot of money, and thank you Vegas for putting the odds up like that.”

As far as just how much he took in, the manager wouldn’t give an exact amount, but it seems as if it was a nice chunk of change:

“We got into the six figures, I’ll put it that way.”

Did Holm score the biggest upset of all-time last night?