YouTuber and podcast host, Logan Paul has officially put pen to paper on a multi-year deal with professional wrestling outfit, WWE (World Wrestling Entertainment) – following a recent high-profile match at a WrestleMania event back in April of this year in Arlington, Texas.

Logan Paul, the elder brother of undefeated professional boxer, the polarizing, Jake Paul – confirmed his signing to the WWE on his official Twitter account this Thursday evening.

“Just signed with the @WWE,” Logan Paul tweeted alongside pictures of him signing his contract with the professional wrestling industry leader.

The organization also confirmed the signing of the Ohio native ahead of an expected appearance at SummerSlam in July, with Paul also sending a message to WrestleMania teammate, The Miz (real name Michael Mizanin)  in the process. Paul posed alongside his WWE contract alongside interim WWE CEO and Chairwoman, Stephanie McMahon, as well as former WWE Superstar, Triple H (real name Paul Levesque).

Paul, who was described as a “YouTube megastar” by the organization, currently has over 23 million followers on his official Instagram, and hosts his own podcast, Impaulsive – on his YouTube channel, which boasts upwards of 23 million subscribers to boot.

Set to continue his excursion into professional wrestling, Paul has been pictured within the entourage of his younger sibling, the aforenoted, Jake Paul during and after the outspoken boxer’s stunning December knockout victory over Tyron Woodley – along with a prior decision win over the former UFC welterweight champion, and a first round KO of Ben Askren. 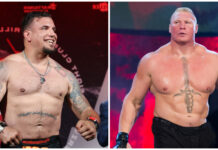 Frank Mir Open To Brock Lesnar Rubber Match But Doesn’t Believe It’s On His Radar: “He Does The Bare Minimum”