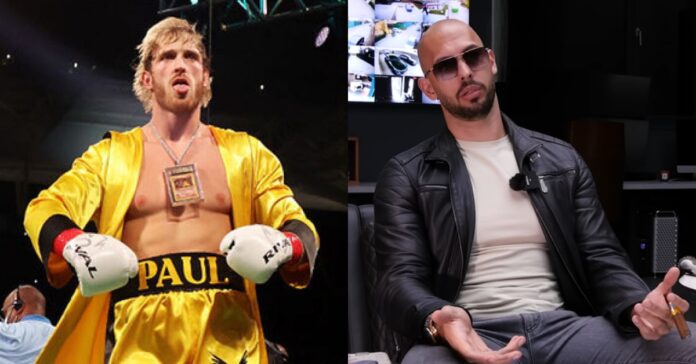 Paul, who boxed professionally just once in the form of a rematch with British rapper and musician, KSI in a re-run of a prior amateur matchup between the two, notably faced former multiple time and weight boxing world champion, Floyd Mayweather in an exhibition matchup last year.

For his younger brother, Jake Paul, the Ohio native improved to 6-0 professionally over the course of the weekend in Arizona – handing former undisputed UFC middleweight champion, Anderson Silva a unanimous decision loss at the Diamond Desert Arena.

Tate on the other hand, had primarily competed as a professional Kickboxer during his time in combat sports, winning world championships and titles, as well as defeating former UFC feature, Luke Barnatt on the amateur circuit in the United Kingdom.

Logan Paul flirts with a potential clash against Andrew Tate

Welcoming a potential grudge match against Tate in the future, Logan Paul claimed that while he would hate to offer the outspoken social commenter a platform as his views don’t align with his own, he took solace in the thought of potentially scoring a devastating win over the former combat sports feature.

“…I’m not sure if I wanted to fight him, because I didn’t want to platform him,” Logan Paul explained. “I’m not sure if I want to support someone who fundamentally I disagree with, I said what I said, I didn’t feel like platforming him. But then this motherf*cker starts talking a lot of sh*t… maybe I would take the opportunity to platform him, just for one night. And turn his f*cking face inside out. Have him wheeled home on the gurney, with his brother holding his hand in the ambulance. The thought of that is kinda compelling.”

Paul has also recently turned his hand to professional wrestling with the WWE (World Wrestling Entertainment), and has already competed at the organization’s flagship event, WrestleMania in the past year.