LowKickMMA.com
Home UFC News Leon Edwards responds to Jorge Masvidal callout: ‘Get on your knees and... 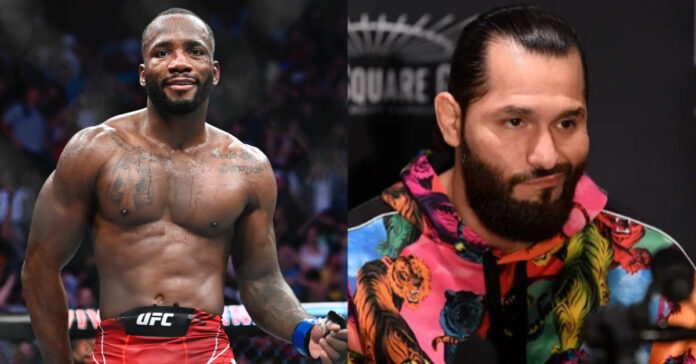 Leon Edwards (20-3 MMA) has quickly clapped back at UFC superstar Jorge Masvidal (35-16 MMA) following his call-out daring him to entertain the possibility of a title fight.

Edwards was last in action in August against Kamaru Usman (20-2 MMA) at UFC 278, in Salt Lake City, Utah.

‘Rocky’ was able to produce a Rocky moment of his own after making his championship dreams a reality, knocking out Usman in dramatic style with a powerful high kick going into the final minute of round five.

Prior to becoming the UFC’s Welterweight Champion, Leon Edwards has been vocal for some time about his desire to finally settle his beef with Jorge Masvidal, ensuing from their backstage confrontation back in 2019.

Although, since capturing the 170lbs title, Edwards has stated that he would want to see ‘Gamebred’ win at least one or two fights before being able to warrant him an opportunity to fight for the belt again.

Those demands don’t seem out of line at all, with Masvidal currently riding a three-fight losing streak, with his last win coming against Nate Diaz in 2019.

Despite the demands set out by the Welterweight champion, Masvidal still hasn’t backed down from trying to manipulate his way into another immediate title shot.

In a recent interview with MMAFighting, Jorge Masvidal attempted to goad Edwards into a response as he believes the English fighter has got “cold feet” and is scared of what would happen if the pair were to square off inside the Octagon.

“Leon, f**king step up to the plate, bro. You begged and cried and did all this bulls**t before when I was fighting for titles. Now you got the belt, let’s go.”

Edwards was quick to hear the noise and evidently, the comments made by Masvidal didn’t sit right with the 31-year-old, who replied on his social media with a controversial ultimatum.

“Refer to me as ‘Mr. Edwards’ or ‘Sir’ and get on your knees and beg and I may consider it.” Edwards wrote.

With Leon Edwards most likely set to make his first title defence back in the United Kingdom, it is still a question of who will stand across from him.

Do you think Leon Edwards will face Jorge Masvidal for the title for the chance to settle their beef?