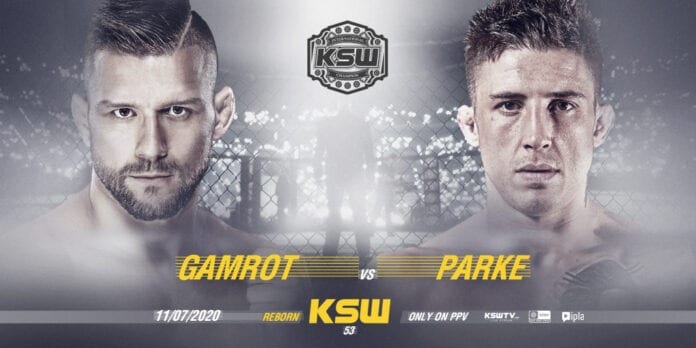 Headlining the card was a trilogy bout between bitter rivals Mateusz Gamrot and Norman Parke. The pair’s previous matches have involved finger biting; eye pokes, cornerman throwing punches as well as a disputed result, and one no-contest.

The fight tonight was scheduled to be for the KSW unified lightweight title with Gamrot returning to defend his lightweight strap after an 18-month absence against Parke, who picked up the interim belt while the Pole was on the sidelines. Unfortunately, the Northern Irishman, missed weight, so the bout was switched to a non-title affair.

Gamrot took control of the contest in the opening stanza, controlling the distance and successfully picking his shots to frustrate Parke, who was unable to get a read on the Pole, despite his aggression.

By the end of the second round, Parke’s right eye was bloodied and closed due to Gamrot’s surgical striking. The fight turned into one way traffic by the midpoint of the third round with Gamrot piecing up Parke with a succession of successful combinations, forcing the ref to step in and call a halt to the contest.

During the broadcast KSW announced that its next show will take place on August 9, so fans will not have to wait too long before getting another fix from Europe’s premier MMA promotion.