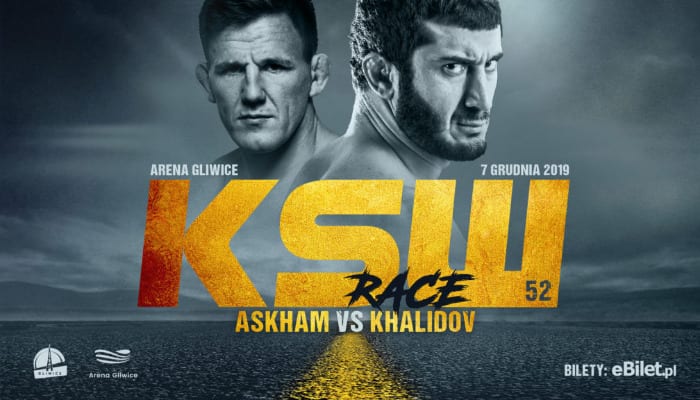 Polish MMA promotion KSW holds its final show of the year this weekend. KSW 52 is set to go down inside Arena Gliwice in Gliwice, Poland, on Sat. 7 December. The event is set to begin 1:00 pm (ET)

Headlining the card is a mouthwatering matchup between England’s Scott Askham and Poland’s Mamed Khalidov. Askham captured the vacant KSW Middleweight World Championship at KSW 49, and now he gets his chance to take on the man who vacated said title in 2018.

The return of Khaildov, long regarded as one of the best middleweights never to have competed in the UFC, adds an extra dose of excitement to this weekend’s card. The fact that the bout will be fought at catchweight does not diminish the scale of this contest.

Since arriving at KSW in March of 2018, Askham has racked up three consecutive stoppage victories. However, a win over the legendary Khalidov would arguably be a greater accomplishment than winning the middleweight strap.

In the evening’s co-main event two Polish Olympic medalists will square off with former weightlifter Szymon Kołecki taking on former wrestler Damien Janikowski at catchweight. This will be Kołecki’s second bout with the organization after defeating Mariusz Pudzianowski back in March. Janikowski, on the other hand, is a seasoned KSW veteran with five fights for the promotion under his belt.

The interim featherweight title will also be on the line when France’s Salahdine Parnasse defends his strap against Slovakia’s Ivan Buchinger. The 22 year-old Parnasse already has 14 fights to name, with a solitary draw marring his near-perfect record. One of the brightest prospects in French MMA, Parnasse’s name, could be one MMA fans are hearing for some time to come.

U.S. fans can watch the event on pay-per-view (PPV) via KSWTV.